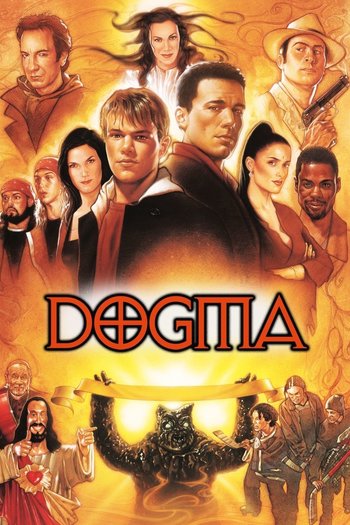 The Metatron: I'm to charge you with a holy crusade.
Bethany Sloane: For the record, I work in an abortion clinic.
The Metatron: Noah was a drunk, look what he accomplished. And no one's asking you to build an ark. All you got to do is go to New Jersey, and visit a small church on a very important day.
Advertisement:

In 1999, Kevin Smith decided to take The View Askewniverse into the realm of religion with Dogma. May God have mercy on our souls.

Late one night, abortion clinic employee Bethany receives a visit from The Metatron, the angel who acts as the voice of God ("Any documented occasion when some yahoo claims God has spoken to them, they're speaking to me")note  Or they're talking to themselves. The Metatron tasks Bethany with a holy mission: she must visit a Catholic church in New Jersey on a specific day to prevent disgraced angels Bartleby and Loki from taking advantage of a special absolution ceremony being held there. The ceremony would grant forgiveness to anyone for any sin, and because the Bible says God must hold true in Heaven what holds true on Earth, this ceremony would allow the angels to return to Heaven.

The angels' potential absolution presents a big problem: God had specifically barred them from ever returning to Heaven, so their dogmatic absolution would disprove God's infallibility—and bring an end to all existence. Since God cannot directly interfere with the angels' plan, Bethany must do the job herself.

Jay and Silent Bob turn up as "prophets" sent to guide Bethany, and the trio later finds allies in disgruntled apostle Rufus and muse-turned-stripper Serendipity—but even with God's blessing on their side, the group's mission grows more difficult thanks to someone working behind the scenes to ensure the absolution of Bartleby and Loki...

Around the time of the film's release, Kevin Smith heard of a group of people planning to picket Dogma at a theater near his hometown, so he decided to go and help picket his own film. When he arrived, less than two dozen people had actually showed up for the "protest", including the reporter and camera crew for a local TV station