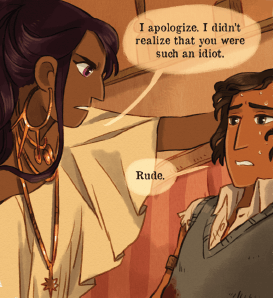 She's apologizing, but not for her actions!
Rat: I'm gonna start apologizing to all the people I've insulted by telling them "I'm sorry that you were offended."
Pig: Is that a real apology?
Rat: No, that's what's so great. It allows me to retain the impact of the original insult while tacking on the implied bonus insult of, "You are an oversensitive ninny."
— Pearls Before Swine
Advertisement:

First, I'm sorry that you have no life and spend all day editing tropes.

Second, this is a subtrope of Sarcasm Mode, when a supposed apology is actually very unapologetic, and instead makes it very clear that either the person being apologized to is the one in the wrong, or that the apologizer prefers Insane Troll Logic to admitting they are wrong. So when Alice is supposed to apologize to Bob, she instead says "I'm sorry you screwed up, Bob."

Why would Alice be apologizing in the first place? Perhaps Bob demands an apology for some tiny or imagined slight, and Alice just can't resist explaining how it's all his fault, instead. Perhaps Alice's boss is a Beleaguered Bureaucrat or a Corrupt Corporate Executive who just wants to get the problem over with, and the easiest way to do that is to order Alice to apologize for something she didn't do. Or perhaps Alice really is in the wrong, but she's enough of a Jerkass to ignore this in favor of putting Bob down.

Note that it's not enough for Alice to say "I'm not sorry." Her apology has to actively shift the blame to Bob. This may cause Alice to say Screw the Money, I Have Rules!, to place Honor Before Reason, or lead her to become The Last DJ. Alternatively, this is just one more spat between Alice and Bob and there are no real consequences, other than Bob now being irritated with Alice.

A subtler variation of this trope is for Alice to apologise by saying something like "I'm sorry if you were offended, Bob." This is a relative of False Reassurance and an even closer relative of the Stealth Insult, since Bob has to pay attention to the wording to notice that she's putting the blame on him for being offended rather than on herself for causing offense.

If it's an Ordered Apology, the character giving the order may declare that it's not acceptable. A genuine apology, one that lacks any sarcasm or double meaning, would be a Heartfelt Apology, the direct opposite of this trope.

Compare with Flippant Forgiveness and Bait-and-Switch Comment. Compare and contrast Never My Fault, where the perpetrator directly blames others for their own wrongdoing, with no attempt to disguise it as a non-apology. See also YouTuber Apology Parody, which commonly intersects with this trope thanks to the common perception of such videos as half-hearted attempts at damage control. If Alice instead apologises to the thing she compared Bob to, that's Insult to Rocks. Also see Two-Faced Aside.

open/close all folders
Anime & Manga
Comic Books
Comic Strips
Fan Works
Films — Animation
Films — Live-Action
"So please — before you think about hurting someone over this trifle of a film, remember: even God has a sense of humor. Just look at the Platypus. Thank you and enjoy the show. P.S. We sincerely apologize to all Platypus enthusiasts out there who are offended by that thoughtless comment about the Platypi. We at View Askew respect the noble Platypus, and it is not our intention to slight these stupid creatures in any way."
Jokes
Literature
Live-Action TV
Pro Wrestling
Puppet Shows
Radio
Video Games
Web Animation
Webcomics
Web Videos
Western Animation
Real Life
#SorryNotSorry
Feedback

Not Berry Sorry at All

In "Stumped" from "Miss Spider's Sunny Patch Friends," Holley spins the Wheel of Choice to stop a fight between Squirt and Shimmer about a berry they both want. But when he suggests that they both apologize to each other, they just use their "apologies" as a way to sling more abuse at each other.

Not Berry Sorry at All

In "Stumped" from "Miss Spider's Sunny Patch Friends," Holley spins the Wheel of Choice to stop a fight between Squirt and Shimmer about a berry they both want. But when he suggests that they both apologize to each other, they just use their "apologies" as a way to sling more abuse at each other.