Series / This Hour Has 22 Minutes 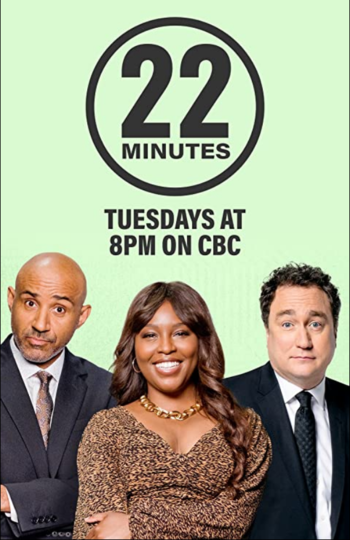 (From left to right) Trent McClellan, Aba Amuquandoh, Mark Critch
"This Hour Has 22 Minutes is a satirical examination of daily events. Some viewers may not share this sense of humour."
— Opening Announcement
Advertisement:

This Hour Has 22 Minutes (more commonly 22 Minutes recently) is a long running political satire show on CBC set up as a a fake news show. The title comes from a famous and controversial weekly Canadian news show from The '60s called This Hour has Seven Days (whose impact was widely felt—despite the fact that the original show only ran for all of two years—enough that they could make a reference to it in 1993 and people would still get the joke). 22 Minutes is a half-hour show, and subtracting commercials they have about 22 minutes of actual content each episode.

The show is mostly sketch comedy revolving around current political issues, and is pretty much evenly split between the 'news anchors' interviewing fictitious people, monologues or dialogues from various recurring characters and actual interviews with real people, mostly politicians.

Very popular in its early run, the show made a national star out of Rick Mercer (who later struck out on his own with The Rick Mercer Report) and to a lesser extent Mary Walsh. At times, its influence on the Canadian political scene could be compared to the Jon Stewart era of The Daily Show on the American scene: as an example, there was a period when the Canadian Alliance (the then-right wing of the Canadian political landscape) was advocating a California-style referendum system, in which a petition signed by three percent of the population would cause a referendum to be held on the petition's subject. Rick Mercer picked up on this, announcing his plan to submit a petition for legislation to force Stockwell Day, the then-leader of the party, to change his first name to Doris. This resulted in well over three percent of the population "signing" on the show's web site by the next morning. It is arguable that this single event crushed Day's hopes for ever gaining the Prime Minister's office, although he later joined the government front bench. What is inarguable is that referendum idea was quickly and quietly dropped from the party's platform immediately and never brought up by them again.

Advertisement:
"At this time, we need to look to Canada's poets for inspiration. And when we think Canada, when we think poets, we all think... Trooper!"
[Cut to montage of Canadian politicians singing along to "Raise A Little Hell"]

Despite the irreverent and sometimes viciously cynical attitude towards all sides of Canadian politics that the show displays, Canadian politicians are remarkably willing to do guest spots and interviews on the show.

Even the ambush reporting done by "Marg: Princess Warrior" and other personas of the cast members is popular, and few politiciansnote except Rob Ford have tried to escape or failed to bear up with good grace. The fact they are also on other networks at the time, as most ambushes are done during a Media Scrum, may have something to do with this.

Compare with The Daily Show and The Colbert Report.

"Well, that's the way we saw the world this week."
— Rick Mercer