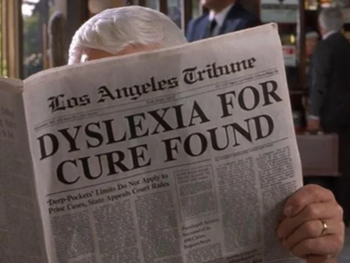 "DYLSEXICS OF THE WORLD, UNTIE!"
— An old joke
Advertisement:

Dyslexia is one of many types of learning difficulties. There are many types of these difficulties and just about everyone has one to some extent or another. With dyslexia, the learning difficulty may range from somebody with horrendous dyslexia who is functionally illiterate, all the way to people who can read just fine, but turn a few letters around when they write. Actually, "dyslexia" and the related condition "dysmetria" describe a wide range of cognitive problems, including things such as difficulty understanding directions, reading maps, and/or doing logical puzzles.

In comedy, it's usually portrayed as jumbled, hilariously misspelled words (see the trope picture), sometimes used in order to spell rude words — if spelling something incorrectly a dyslexic wouldn't necessarily form recognizable words at all. In drama and televised series, it's sometimes the focus of a Very Special Episode.

If you have further interest on the subject or want to know how to portray dyslexia more accurately, check out our Useful Notes page on Dyslexia. Compare Attention Deficit... Ooh, Shiny!, for media's treatment of ADD/ADHD.