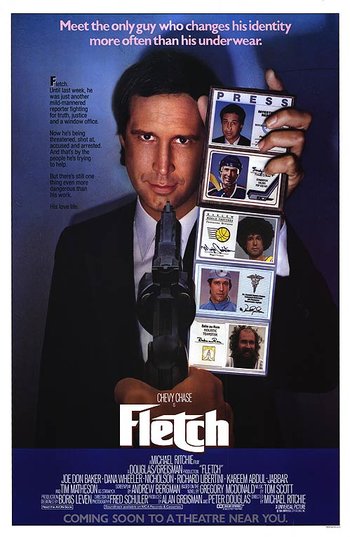 "If you shoot me... you're liable to lose a lot of those humanitarian awards."
Advertisement:

1985 comedy-mystery film starring Chevy Chase, based on the novel by Gregory Mcdonald.

Irwin M. Fletcher (Chevy Chase), better known as 'Fletch', writes a column for a Los Angeles newspaper under the byline 'Jane Doe'. He's working undercover at a local beach where a lot of hard drug-trafficking is taking place when he is suddenly cornered by Alan Stanwyk (Tim Matheson) who, assuming him to be one of the many junkies floating around the beach, makes him a strange offer. Claiming he has incurable cancer, Stanwyk asks Fletch to murder him a week from that date in order to both avoid his suffering and to provide for his family by allowing them to claim life insurance. Intrigued, Fletch begins to investigate Stanwyk's claims, discovering that things may be tied in with the story he is investigating at the beach, and that a sinister police chief (Joe Don Baker) may also be involved...

Probably Chevy Chase's most well-known role after Clark Griswold, and something of a cult hit. A 1989 sequel, Fletch Lives, takes Fletch to The Deep South where he investigates intrigue around his family estate.

Has nothing to do with the British series Porridge, the main character of which is also referred to as 'Fletch'.