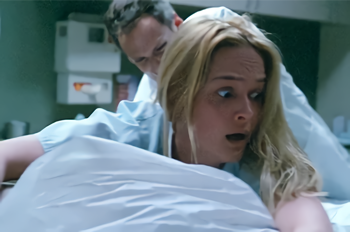 "Well, at least here you'll be treated with dignity. Now strip naked and get on the probulator."
— Turanga Leela, Futurama
Advertisement:

Medical examinations, particularly the physical exam, are generally not the most comfortable of situations. Real-life doctors generally get specific training to address professionalism and bedside manner.

Fictional doctors, on the other hand, generally come with a selection of flaws that are demonstrated in their overall behaviour. And patients may have their own hangups. Thus, giving or getting a physical is a great way to demonstrate that something isn't quite right. The doctor may be a little too intimate, brutally logical, or obsessive about some minor symptom that turns out to be a major plot point. The patient may have a panic attack, revealed to be related to past trauma. The discomfort of the exam itself is sometimes an allegory for the greater difficulty faced by the character. Or perhaps they enjoy the exam a little too much themselves. The viewer may be meant to share in the discomfort, creating sympathy for the patient, antipathy for the doctor, or a chance to display the emotional attachments of another character.

Often involves a medical Ass Shove gag. See also Strapped to an Operating Table. And whatever you do, never Turn Your Head and Cough. Compare Pervy Patdown.