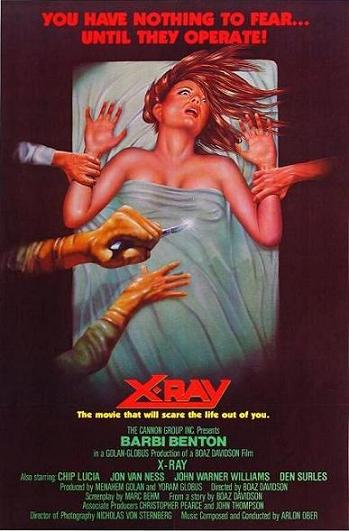 Obligatory "YOU CAN CHECK IN, BUT YOU CAN'T CHECK OUT!"
All her bones are decaying and her organs are all rancid and her blood is malignant as slime...
Advertisement:

Hospital Massacre (also known as X-Ray and more rarely as Ward 13) is a 1982 Slasher Movie, directed by Boaz Davidson for The Cannon Group.

On Valentine's Day in 1961, a little girl named Susan Jeremy, after being left a Valentine by nerdy classmate Harold Rusk, crumpled it up and mocked Harold along with her friend David, who Harold (who had been watching the two from outside Susan‘s house note  No, not ''that'' Susan's House. ) killed in a fit of rage by somehow impaling him on a hatstand while Susan was in the kitchen getting cake.

Exactly nineteen years later, Susan (by now divorced from her husband Tom, with a daughter named Eva, and a fiancé named Jack) is stopping by a hospital to pick up the results of a routine check up required by her new job, but finds herself being forced to stay overnight by the staff after a man in surgical attire secretly murders her personal physician and tampers with her file. As the masked man starts murdering medical personal and appears to be zeroing in on her, Susan realizes something is horribly wrong, but her concerns are ignored by everyone except an ever so helpful intern named Harry, who begins trying to help her escape the hospital, which is quickly becoming a bloodbath...

The doctors say this film shows symptoms of the following: