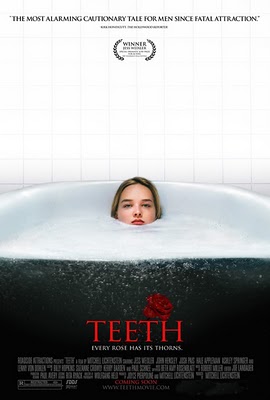 And a lot of cowboys are about to sing some very sad songs indeed.
Advertisement:

In this movie, groin attacks you!

Teeth is a 2007 independently produced black comedy/horror flick about a good-hearted girl whose vagina likes to bite off penises. She discovers her incredible gift one day when her love interest attempts to date rape her. Throughout the movie the audience is treated to very nearly every man in the movie attempting some kind of sexual assault on Dawn, and having his offending appendage(s) bitten off as a result. If that makes it sound like it's a Lifetime Movie of the Week with a carnivorous vagina thrown in, that's because that's (basically) what it is.