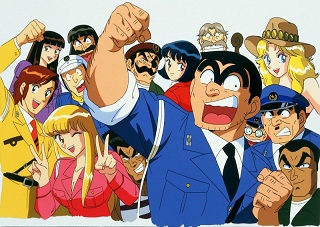 Kochikame (short for Kochira Katsushika-ku Kameari Koen Mae Hashutsujo, which translates to This Is the Police Station in Front of Kameari Park in Katsushika Ward) is a comedy manga that ran in Weekly Shonen Jump, written by Osamu Akimoto. The main character is Kankichi Ryotsu, a lazy, street-wise cop with salaryman tendencies, like playing Pachinko, betting at the horses or trying his luck at custom get-rich-quick schemes. Some times, he even does police work.

Worthy to mention is that the manga does not have numbered chapters and was almost never considered to participate for the regular popularity polls in Shonen Jump note  Shonen Jump's popularity polls determine which series are likely to be kept/cancelled, basically meaning Mr. Akimoto could continue the series as long as he wanted. And this series' heavy anti-cancellation armor showed: It ran weekly since it began in 1976, with over 1600 chapters. There have been 200 volumes produced (and more than 360 episodes aired on Japanese TV), making Kochikame the longest-running manga series in history note  Disregarding Golgo 13 and Doraemon, neither of which are in production currently.

The series owes its longevity (and lack of chapter numbers) to the fact that it hardly ever uses continuing plots. Instead, each chapter is a self-contained comedy tale, usually involving Ryotsu trying to get rich via some sort of scheme, which invariably backfires horribly. The straightforward plots mean that generations of Japanese kids have been able to enjoy the series without prior knowledge of previous stories. The series has remained fresh by taking most of its humor from pop culture and real world events: often Ryo's latest scheme involves capitalizing on some current fad or event in the news.

For its 30th anniversary in 2006, Mr. Akimoto was awarded with many of Shueisha's (and other publishers as well) artists making Crossovers with his series, such a event being legendary since when artists are invited to pay a homage to Long Running series in Jump, said artist will likely draw a character from the series with his own artstyle and not much else; Kochikame got actual crossovers, full self-contained stories and appearing in other Jump series as a Cameo, it also made some artists who were working in nothing at all to get off their seats and make a story just for this ongoing legend.

In 2016, after 40 full years in the business and 200 volumes, Kochikame finally came to an end, although it will get a 201st volume on October 4, 2021 to compile a bunch of extra one-shot chapters that were published after the manga was done.