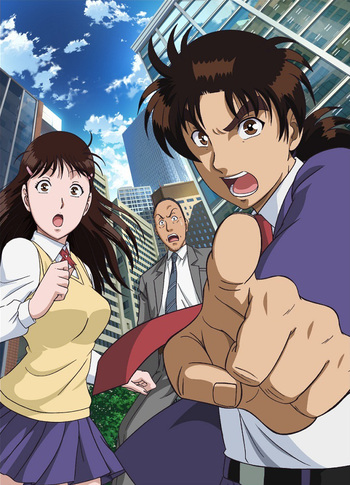 Hajime Kindaichi, as the grandson of famous detective Kosuke Kindaichi

, picked up the tricks of his trade from Grandpa and, after proving himself to the skeptical police in his first case, finds himself tangled up in the murder mystery from hell on a regular basis.

Though fairly obscure in the west, Kindaichi was Japan's most popular manga for much of its original run and remains quite popular today. The series relies on a strong formula that mixes the horror and detective genres: the atmosphere is similar to a well-made Slasher Movie, with the killer usually taking the persona of a legendary monster. He then murders his victims in gruesome ways relating to the legend, thus providing a more violent version of a "Scooby-Doo" Hoax. He still leaves clues, though, which Kindaichi is inevitably the only person to notice. There's always some secret tragedy from the past (often surprisingly moving) motivating the killer as well. All of which leads up to the climax of each story where Kindachi unmasks the perpetrator in a dramatic summation gathering. Each story is also a rather challenging Fair-Play Whodunnit so clever readers may be able to beat Kindaichi to the solution.

The manga began serializing in Kodansha's Weekly Shōnen Magazine in October 1992, with the first compilation volume released in February 1993. Dubbed as the "File series", it would run for 27 volumes (19 long cases). The continuation, "Case Series" (10 volumes, 7 long cases with one Akechi's case thrown in the mix) along with Short Case compilations (6 volumes, 20 short cases ALSO with Akechi's own case thrown in the mix) were published in 1997 until 2001 in which the series seemingly ended with a grand finale chapter. As of 2004, the series has restarted in Japan, dubbed "New Series" (14 volumes, 8 long cases, 2 average cases, and 4 small cases). To commemorate its 20-year Anniversary, Four long cases (with 1 small cases) were published in 5 volumes. The manga resumed its weekly serialization (with occasional long hiatus) as the "Return Series", currently publishing 8 volumes with 6 long cases, an average case, and 3 short cases. The first series was distributed in the US by Tokyopop, but is now out of print.

An 148-episode anime adaptation started airing in 1997, but it faded into obscurity; a follow-up series, titled The Kindaichi Case Files R (the R stands for "Returns") aired in 2014, spanning two seasons of 25 and 22 episodes respectively. In 2017, 2 new spin-offs came along: The Culprit Case Files, a humorous revisiting of past case files focusing on how the culprits pulled it off, and The (37-year-old) Kindaichi Case Files, focusing on an adult Kindaichi who gave up on detective work but recently is getting caught up in various cases again. The series also has five live action adaptations, with two of the longer running ones being Kindichi Case Files N (2014) and a Setting Update reboot coming in April 2022.