Manga / Keyman: The Hand of Judgement 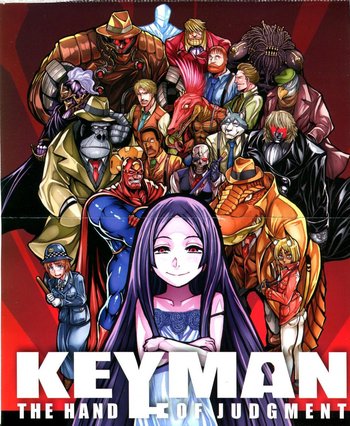 Keyman: The Hand of Judgement is an Seinen Urban Fantasy Film Noir manga written and illustrated by Warai Naku.

Lockville City, where both humans and beastmen live, is under the protection of a resident hero known only as Keyman. Despite his violent methods, he's loved by the populace and the crime levels have decreased significantly. This does not put the local police force in a good light, with causes to no end of fury for Detective Alex, an anthropomorphic T-Rexpy. After Keyman catches yet another group of criminals, it seems that the Status Quo in Lockville City won't change anytime soon.

That is, until Keyman is brutally murdered in an alley.

Now Alex and his team must investigate the murder of the one person they believed to be unkillable. One of their few clues are the words "Dr. Necro," which were carved onto Keyman's body after his death. Things take a turn for the weirder when Alex, drinking away his frustrations at a bar, unexpectedly meets "Dr. Necro"... who appears to be a young girl. They are then assaulted by a monstrous man, whom the girl identifies as a "Keyman". Then another "Keyman" appears and deals with him, quickly leaving the scene.

Now Alex is left with even more questions. What sort of monster could be behind the murder of Keyman? In what way is the childlike Dr. Necro involved? And perhaps most importantly - what IS a Keyman?

Keyman: The Tropes of Judgment: