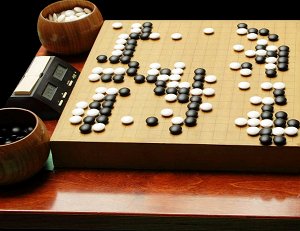 "A few moments to learn, a lifetime to master."
—Ancient Proverb
Advertisement:

is a board game for two players, noted for being rich in strategic complexity despite its simple rules. It is known in China as 围棋 (Wéiqí); in Japan as 碁 or 囲碁 (Go or Igo); and in Korea as 바둑 (Baduk). Go reached the West through Japan, which is why it is commonly known internationally by its Japanese name, and much of its technical vocabulary is Japanese, although it originated in China and plays a much larger role in Chinese culture than Japanese.

The game is played by two players who alternately place circular black and white pieces called "stones" on the vacant intersections of a grid of 19×19 lines. Once placed on the board, stones cannot be moved elsewhere, unless they are surrounded and captured by the opponent's stones. The object of the game is to control a larger area of the board than the opponent.

Placing stones close together helps them support each other and avoid capture. On the other hand, placing stones far apart creates influence across more of the board. Part of the strategic difficulty of the game stems from finding a balance between such conflicting interests. Players strive to serve both defensive and offensive purposes and choose between tactical urgency and strategic plans.

The origins of Go are Shrouded in Myth. The game was invented in ancient China more than 5,500 years ago, so Go is probably Older Than Dirt and is thus the oldest board game continuously played today. It was considered one of the four essential arts of the cultured aristocratic Chinese scholar caste in antiquity. The earliest written reference to the game is generally recognized as the historical annal Zuo Zhuan. Archaeological evidence indicates that the early game was played on a board with a 17×17 grid, but by the time that the game spread to Korea and Japan in about the 7th century, the 19x19 board had become standard. The game is most popular in East Asia, but spread to other parts of the world. A conservative estimate places the number of Go players worldwide at approximately 27 million.

If you want a cursory animated introduction, try watching Hikaru no Go, which may have inspired many to play Go. For much more information check either The Other Wiki or visit Sensei's Library,

a wiki devoted to the game. There is also a website

keeping track of most of the professional world of the game. The PasoGo is a console that's entirely dedicated to the game, though it sold poorly.

Essays have been written about the differences between Go and Chess. Broadly speaking Go has simpler rules and is easier to learn than Chess, but is far more open in its possibilities. We were able to create computers that have mastered Chess by the mid-90s, but until 2016 Go eluded them. Some theorize this is for more than simply the size of the board adding astronomically more possible games of Go. Yet you could probably teach a five year old to play Go in an hour. This came to an end in March 2016,

when Korean 9-dannote basically the top rank of grandmaster, in chess terms Lee Sedol lost 4-1 against Google's AlphaGo project. Notably, this utilizes a fundamentally different approach to AI than Chess. Chess computers operate in essence by brute force - calculating all possible options and looking for the best ones (in practice, they can speed this up by ignoring obviously bad options), while AlphaGo uses an approach called "Deep Learning", in which it analyzes tens of millions of games played by humans as well as billions of games played against itself and looks for common factors that differentiate moves that lead to wins from moves that lead to losses.

Not to be confused with the 1999 film Go, the short-lived early '80s television game-show, the travel-themed family board-game published by Waddingtons, the programming language developed by Google, or the Let's Play series by Achievement Hunter.

Sometimes used as the game of choice for the trope Smart People Play Chess.

Go provides examples of a number of the tropes to which this wiki is dedicated: