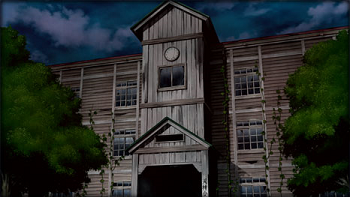 One of the staples of school settings in anime and manga is the Old School Building (Kyuukousha), an old wooden building (or wing) on the grounds that is often used as storage, for clubrooms, or just left abandoned when the school resettled in a brand new building. If derelict, it is most likely haunted (or believed to be), so will be the subject of at least one of The Seven Mysteries and may be used for Kimodameshi.

This trope is an artifact of history and by now largely out of date. In the post-war era, Japan went through an educational reform as demanded by the USA. This brought along an immediate need for new, modern school buildings, and most in use today were constructed during the Shōwa 30s (1955-1965 era). The new ones would be set up next to the existing old school buildings and sometimes the old building became incorporated into the new building. Either the old building (portion) would be abandoned immediately or it would be used less and less. Half a century later, they've nearly all been demolished or modernized. That said, new school buildings were only built where they were a sound investment, so many rural and suburban schools continued to make use of wooden buildings up until the early 21st Century. Nowadays, these are abandoned not because of any new buildings, but because there aren't enough children anymore in those areas to make it worthwhile having a school around at all. Some have been repurposed for other community needs, others are maintained by the locals just because, and again others are exactly the kind of place in which you'd expect to run into a ghost.

Not related to building things the old way, without concrete and lift cranes.