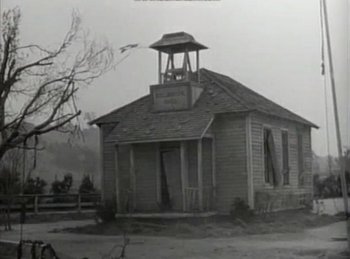 It was written, produced, and narrated by John Nesbitt as part of his Passing Parade series of film shorts for MGM. This one deals with what was even then a vanishing institution: the rural one-room schoolhouse. As Nesbitt explains in his narration, the building of a highway system has made the one-room schoolhouse obsolete, as it is now more efficient to bus the kids in tiny rural communities to larger schools in towns. The film regards this with melancholic nostalgia, focusing on one particular one-room schoolhouse, and on Miss Turlock, an Old Maid schoolteacher who spent decades helping to raise the children of one little town.