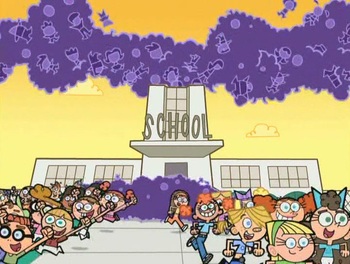 Yes! Finally! It's the day everyone's been waiting for all school year long before a big summer vacation of fun! It's...THE LAST DAY OF SCHOOL!

Many things happen on the last day of school, such as last-minute preparations, cramming, anticipation, and trying to admit one's feelings to someone special. Episodes don't always involve the last day. The plot may take place on the last few days, and it can expand beyond the last day in some cases.

Characters may also learn An Aesop based on whatever they experience.