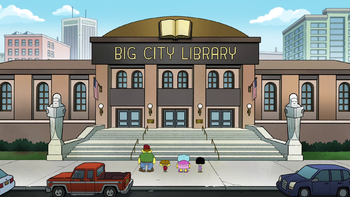 Behold: An endless catalogue of books.
Books are cool and all, and it's fun to read and learn. So where's the best place to read and learn? Why, none other than the library! Schools and public areas are known to house the wonderful world of reading, and you're free to read to your heart's content. But shh! — It's the rule to be quiet when in the library so you don't disturb anyone working or studying.
Advertisement:

Thus, the Library Episode revolves around characters going to a library for whatever the plot demands; if the quiet rule is played to the extreme, it may involve a Scary Librarian. If the loudness aspect goes too far, it could result in So Much for Stealth. These episodes may also include the Extremely Overdue Library Book trope, where the character may have to pay a huge fee as a result of keeping the book they borrowed for so long. If the library happens to be extravagant, then it could result in a Great Big Library of Everything.

Please note that a Library Episode is an episode that involves a library exclusively; if the library appears but characters briefly visit, then it doesn't count. This episode can also result in a "Reading Is Cool" Aesop, though it sometimes might be a Very Special Episode as well.