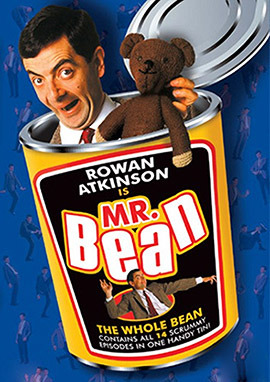 The show is about a very odd man about whom we know nothing except his last name, who basically wanders around, getting into trouble, finding unique solutions to predicaments, and both wittingly and unwittingly causing mayhem. Mr. Bean is perhaps the ultimate example of No Social Skills. Not only does he seem to be unfamiliar with all social conventions and standard methods for doing anything, he never even demonstrates normal human thought processes — witness his strategy for protecting his furniture and possessions when painting his flat, which is to wrap every single item in newspaper right down to individual grapes, not to mention that his method of painting the flat includes a stick of dynamite.

Considering the mixture of stupidity and inspiration in his way of doing things, Mr. Bean epitomizes the aphorism, "Nothing can be made foolproof because fools are so ingenious".

The vast majority of the humor is visual, to the point that the eponymous character says only a handful of complete sentences throughout the entire run of the series. Pretty much every plot is based around how Mr. Bean handles an everyday situation, such as going to a department store, going to church, sitting for an exam, etc. In essence, it was a Sketch Show in disguise, especially considering the way that the "plot" was only maintained throughout a few of the episodes. Because of its largely visual and disconnected nature, it was cheap and easy to air in foreign markets as no language dubbing was required and so was bought by networks all over the world. As a result, it is big pretty much everywhere. It is still Rowan Atkinson's most lucrative and recognized work.

It was followed by an Animated Adaptation, which was less well-received by the several fans who cited the whole point of the original show is Rowan Atkinson's physical performance. That said, it actually lasted a fairly long while, going for five seasons and 130 episodes.note Initially three from 2002-2004. But suddenly came back in 2014 and ran until 2019. It can be found in kids' channels on Pluto TV or the full seasons streaming on Tubi.

In 2006, the MythBusters tried to reproduce Mr. Bean's "dynamite in a paint bucket" method of painting his flat, with no luck.

Speaking greatly to the popularity of the character, Mr. Bean was part of the opening ceremony of the 2012 Olympic Games in London, via a skit in which he's part of the orchestra playing the theme from Chariots of Fire (specifically only one note on the electric piano over and over again). That turned out to be Mr. Bean's farewell, as Atkinson said in November 2012 that he was retiring the character, citing among other reasons the problem of playing a childlike man as he continues to age.

However, in October 2014, the character returned in an ad for the chocolate bar "Snickers" as part of their "You're Not You When You're Hungry" campaign, where he plays the alter-ego of a Chinese assassin and blunders across rooftops, making a complete ass of himself... until he's told to "eat his Snickers" and reverts to assassin mode. Watch it here

Atkinson also revived the character to take part in Comic Relief 2015, a fund raising event for the similarly named UK charity (founded by Curtis and Lenny Henry). In the short, Mr Bean gets into hijinks... at a funeral.

The entire series is available on YouTube care of the official channel.