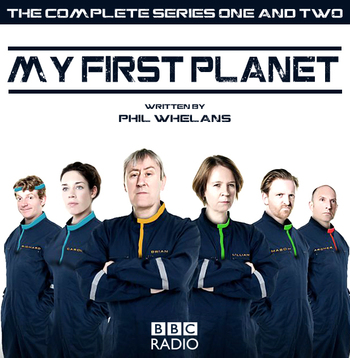 My First Planet is a BBC 4 sitcom released in 2012. Set on a newly founded space colony, Brian Palmer (Nicholas Lyndhurst) finds himself thrust into the role of base commander when the original postholder dies in a cryosleep accident.

Brian's fairly convivial approach is often challenged by the ruthless Dr. Lillian Pointer (Vicki Pepperdine), who is in charge of Project Adam, which intends to create the first child fully conceived and birthed in space. Unfortunately, the assigned Adam and Eve, Richard and Carol, only lied about being a couple to get into space. Other characters include Archer, a self proclaimed "empath", and Mason, the thoroughly amoral Head of Science.