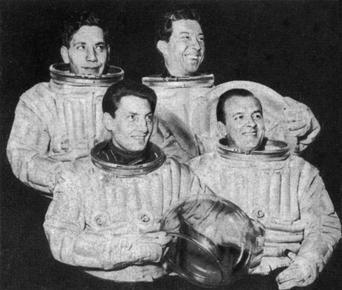 The cast of The World in Peril photographed in Radio Times
Journey into Space was a BBC radio series written by Charles Chilton. It was originally broadcast from 1953 to 1958 but set in the distant future of 1965 to 1972.
Advertisement:

It was the last British radio programme to achieve higher ratings than its television rival. At 19:30 on January 10, 1955, the penultimate episode of The Red Planet received a 17% audience share in comparison to 16% for the daily newsreel on the BBC Television Service (now BBC One).

The original series consists of:

Several further one-off instalments were produced after the original run: