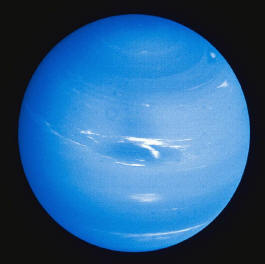 The Mystic.
Profile
"Le Verrier — without leaving his study, without even looking at the sky — had found the unknown planet [Neptune] solely by mathematical calculation, and, as it were, touched it with the tip of his pen!"
— Camille Flammarion, Astronomy for Amateurs
Advertisement:

The eighth planet from the Sun, Neptune was named after the Roman God of the Sea because of its blue hue. (Though Modern Greece calls it "Poseidon".) Neptune is an ice giant. Similarly to Jupiter's Great Red Spot, Neptune has its own series of atmospheric storms collectively titled as "The Great Dark Spot". Unlike the Red Spot, the Dark Spot comes and goes; the original southern Dark Spot was discovered in 1989 and had disappeared by 1994, with another prominent spot appearing in the north some years later.

The surface gravity on Neptune is 1.14 g, which is 14% stronger than Earth. If you could stand on Neptune, it would be the equivalent of carrying around a heavy backpack on Earth.

Similar to Uranus, an oddity of Neptune's magnetic field is that it is heavily tilted relative to the planet's axis, as well as off-center. This shared mystery of the ice giants remains unsolved.

Neptune has the honor of being the first planet to be discovered with mathematics as opposed to actual astronomic observation. Thus, it was not so much discovered, as predicted mathematically. Fitting, since it is the only planet that can never be observed from Earth without a telescope.note Technically, at its brightest, it might be just barely visible to the naked eye by someone with absolutely perfect vision observing from somewhere with no light pollution at all, but don't hold your breath. It was first spotted way back in the 1610s by Galileo, but he mistook the planet for a fixed star due to Neptune having begun its apparent retrograde motion that same day. And in 1830, 16 years before Neptune would be discovered, Sir John Herschel, son of Uranus discoverer William, observed Neptune unknowingly. When predictions for Uranus' orbit were proven to be off, it was hypothesized that another planet was exerting some gravitational force. After years of calculations, Urban Le Verrier proved Neptune's existence and told astronomers where to point their telescopes, assuring them a planet would be there for them to see. Johann Gottfried Galle, who Le Verrier sent his calculations to in the mail, found Neptune that very night after less than an hour of searching and less than a degree from the predicted position. Triton was found just seventeen days later.

Neptune's current claim to fame: it has the fastest winds in the solar system, as high as 2,100 km/hour, or Mach 1.7; yes, Neptune has supersonic wind. The reason for this is that despite its distance, Neptune radiates 2.61 times as much energy as it receives from the Sun. Like Jupiter, this is because Neptune is contracting.

Discoveries from the 1990s onward have shown just how profound an effect that Neptune has had on the Solar System's structure. The inner boundary of the Kuiper Belt is defined by Neptune's gravity, and the scattered disk exists almost entirely because of Kuiper Belt objects that passed too close to the planet and were launched into eccentric orbits. In this way, Neptune is the most similar to Jupiter of any other planet.

Neptune completed its first full orbital period from its discovery in September 2010.

It would take until the 20th century to discover its ring system as well as any new moons, the bulk of which were discovered by Voyager 2. Even so, more recent observations in July of 2013 showed that the probe had missed some moons, bringing Neptune's moon count up to fourteen.

A little-known fact about Neptune is that for the first five or so years after it was discovered, it was considered the Solar System's twelfth planet. The demotion of the four largest asteroidsnote The largest of these, Ceres, was promoted to dwarf planet after the category was created for Pluto. five years after Neptune's discovery bumped it up to the eighth.