Useful Notes / The Moons of Neptune

Like Neptune itself, the Roman name of Poseidon, Neptune's moons are named after Greek deities and beings associated with water. Only Triton and Proteus have been imaged with enough detail to discern geographical features. 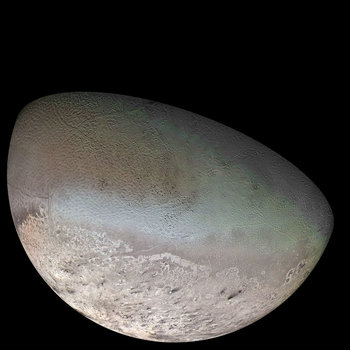 The most-well known among Neptune's moons. Discovered just seventeen days after the planet itself, this moon enjoyed the status of "Neptune's Moon" until the discovery of Nereid in 1949. Unlike most large moons, it has a retrograde orbit around Neptune; this indicates that Triton must be a captured object, rather than forming from the protoplanetary disc like most moons. Like the Moon, Triton is tidally locked, presenting exactly one face to Neptune at all times. Its surface chemical composition mirrors Pluto, sitting at approximately 55% frozen nitrogen, 15–35% water ice, and 10–20% dry ice (frozen CO2). Its mantle is actually water, and like Europa, the possibility of a subterranean ocean exists. The most spectacular aspect of Triton are its cryovolcanic eruptions.

Triton's compositional similarities to Pluto are the root of the debunked theory that Pluto was an escaped moon of Neptune. The reasoning was that their similar compositions implies that the two have similar origins, and they do, but in reverse of the original theory. From the 1990s onward, the prevailing theory is that Triton originated as an independent dwarf planet in the Kuiper Belt before it was captured. Interestingly, computer simulations with currently known parameters suggests that Triton's odds of being captured were extremely low; it had a much higher chance of being launched into the Scattered Disk like Eris was when it got too close to Neptune. Even more interesting, this conundrum was solved by making Triton part of a binary system similar to Pluto and Charon: Triton's orbit around the barycenter created by its hypothetical partner gave it an angular momentum that greatly increased the chances of being captured. IF this scenario is correct, the fate of Triton's hypothetical ex-partner is unknown.

Unfortunately, thanks to its slow, decaying orbit, Triton is doomed, and likely to be torn apart by Neptune when it gets too close. On the bright side, thanks to its icy composition, there's a chance it will become a gaudy ring system to rival Saturn's. If not, it will collide with Neptune in several billion years.

Given the great detail at which Triton has been examined compared to other worlds observed by Voyager 2, there are multiple naming conventions used for its geographical features. They tend to lean toward rivers and other bodies of water described by human mythologies, as well as islands considered sacred in the same.

There is currently a proposed mission named Trident that is intended to target Triton. If adopted by NASA in 2021, it could visit the Neptune system in 2038.

The only other moon to be confirmed before Voyager 2 flew by in 1989. The third-largest moon of Neptune, it was discovered in 1949. Surprisingly, the actual shape of Nereid is unknown. While water ice has been detected, the actual moon is neutral in color. Voyager 2's camera did not have the resolution to get clear enough images to determine physical characteristics.

The existence of this moon was first noticed in 1981 by occultation charting. Like Nereid, little else is known beyond the fact that it is a "rubble pile" of accreted rocks, is the fourth largest moon, and the location of its near-perfect circular orbit may mean that one day it hurtles into Neptune. It finally received its name after a decade of observation in 1991. Like the other innermost moons of Neptune, it may have formed from the remains of earlier satellites that were destroyed due to Triton messing with their orbits after the former was captured by said planet.

The second largest moon of Neptune after Triton, discovered during Voyager 2's flyby. It's closer in shape to a polyhedron rather than a sphere, measuring roughly 400 kilometers, and is heavily cratered.

Only one feature is named on Proteus so far. The range of names for its geographical features are water related spirits and deities in human mythologies—except for Greek and Roman.

Five other moons were discovered by the same spacecraft. Another four were discovered in 2002. Psamathe's discovery in 2003 marked the first time a single Neptunian moon (as opposed to a bulk) was discovered since Larissa. It would be the last one until July of 2013, when a new moon was confirmed, and known as Neptune XIV until it was formally named Hippocamp in February 2019.