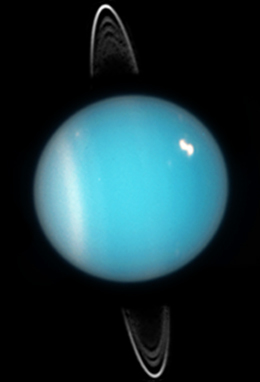 The most unfortunately named planet of the Solar System.
Profile
Fry: Oh, man, this is great! Hey, as long as you don't make me smell Uranus.
Leela: I don't get it.
Farnsworth: I'm sorry, Fry, but astronomers renamed Uranus in 2620 to end that stupid joke once and for all.
Fry: Oh. What's it called now?
Farnsworth: Urectum.
— Futurama, "A Big Piece of Garbage"
Advertisement:

The seventh planet from the Sun, so far away it could be argued that the Sun does not shine there. It is a "giant planet", and full of gases like methane and ammonia, though its inner composition is various ices and rock which astronomers have said is sort of an icy "pudding" surrounding a solid core. When first encountered, the haziness of the planet at the time made it look like a nearly featureless blue ball; better images over a decade later showed it had striations and white wisp-like clouds. Coincidentally, this fits in with its namesake, the Greek god of the sky.

The planet, while visible to the naked eye (albeit very faint), is not one of the classic original planets, and is the first planet to be recognized as one via telescope, thanks to Sir William Herschel, who was originally going to call the planet "George", or more specifically, Georgium Sidus after King George III. Eventually, Uranus was picked at the suggestion of Johan Elert Bode, keeping in line with the other planets being named after gods from classical mythology. The reasoning was that if the next planet past Jupiter was named for Jupiter's father, then the next planet past Saturn should be named after Saturn's father. Planet naming conventions being in their infancy at the time, this left Uranus as the only true planet named after a Greek god, rather than the Roman counterpart; Uranus is the Romanization of Ouranos, Greek god of the Sky. Because of this break with the theme of the other seven planets, and other reasons, some astronomers and enthusiasts have bemoaned that the planet was not named Caelus instead. Or even just keeping it in the non-Latinized Greek as Ouranos. Amusingly, one of the names that was proposed and rejected was Neptune.

Uranus has the dubious distinction of being the least important of the four gas giants. Where Jupiter is massive enough to heavily affect the entire rest of the Solar System, Saturn prevented Jupiter from the migrating further inward and destroying the four terrestrial planets, and Neptune governs the Kuiper Belt and created the Scattered Disk, Uranus doesn't really do much besides keeping Saturn and Neptune in their current positions; even its climate is relatively calm next to its two giant neighbors, with rather few atmospheric features to speak of. Uranus does have the distinction of being the coldest planet in the Solar System since unlike Neptune, it has no internal heat source. Unfortunately, there is a growing body of evidence that Uranus will lose even that

It has a ring system, like Saturn and other similar planets, a magnetosphere that draws objects into it, and of course, moons.

Its most striking feature, however, is that the gas giant is rotating on its side, thanks to either being smacked upside its head by two glancing blows

from planetoids about the size of Earth early in its life, or being a side effect of the Grand Migration, with the combined gravity of Jupiter and Saturn pulling it on its side, or a combination of both. Thanks to this orientation, astronomers have joked that the ring system makes Uranus look like it's a bullseye

Another oddity of Uranus is its magnetic field. Unlike Jupiter and Saturn, whose magnetic fields are caused by a layer of metallic hydrogennote hydrogen that has been compressed to the point that it conducts electricity as a metal would, Uranus's magnetic field is produced by a layer of highly compressed water, mixed with ammonia that has condensed and rained down from the upper atmosphere. This appears to be normal for ice giants. The oddity is that Uranus's magnetic field is tilted sixty degrees relative to the planet's axis and off-center. The reason for this is unknown.

Like all gaseous planets, Uranus experiences differential rotation: different latitudes rotate at different rates. Unlike the other three, Uranus's poles rotate faster than its equator.

Currently, it's on its side in relation to the Sun. This has led to the realization (via observations from the Hubble Space Telescope) that the planet is actually two-toned, with a darker shade of blue on the north half of the planet.

Current models of solar system formation indicate that Uranus began its existence as the outermost of the true planets. It gained its position as the seventh when Neptune and the still hypothetical Planet Nine were vaulted into even more distant orbits.