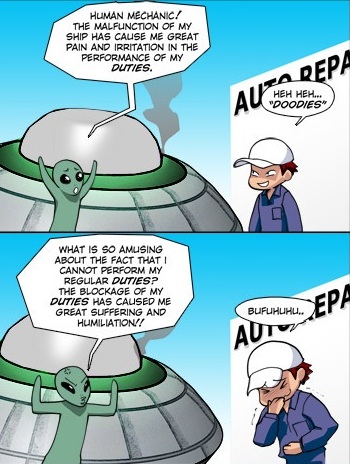 A situation where one character says a word or phrase in a non "Double Entendre" (or sometimes not even Innocent Innuendo) manner, but another takes it the wrong way and starts laughing. Bonus points if the first person tells the second to "grow up" or something similar. The amused character saying "That's What She Said!" has the same effect.

And yes, like That's What She Said, this can definitely be Truth in Television, depending on how often you hang out with immature people.

An especially immature version is that one character (often a girl) actually says some "naughty" word, like "butt", but in a rather non-sexual situation, and another character (often a boy) stops listening to her, just snickering to his mates: "Heh, heh, she said 'butt'."

Another childish version is for not sexual per se, but cheeky words like if a character says "I would like to X, but Y", another character says "Heh heh, you said "butt"."

Another version, mainly used ironically, is when one character says a "naughty" word or an intentional Double Entendre and another character replies "Heh heh, you said X", regarding some other things that they said. For example: "I have a big butt" — "Heh heh, you said 'have.'"

Compare Lampshaded Double Entendre and Fun with Homophones. Super-Trope to LOL, 69 and Uranus Is Showing.

Grim is mocked when he mentions Uranus to the Reaper of Mars.

Grim is mocked when he mentions Uranus to the Reaper of Mars.