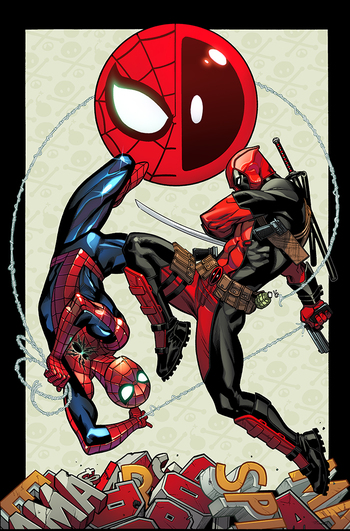 A 2016 ongoing featuring Spider-Man and Deadpool and part of the All-New, All-Different Marvel event, written by Joe Kelly.

The comic focuses on Deadpool and Spider-Man as they team up to face various threats. While Deadpool is immensely pleased as he finally gets to hang out with his favorite wall-crawler, Spider-Man is initially all too disgusted with Deadpool, having previously quit the Avengers Unity Squad because Deadpool became a member. As they team up and hang out together, Spidey learns about the man behind the wisecracking mercenary, while Deadpool starts holding himself to a higher moral standard in order to get closer to Spidey. It's not all bromance and sunshine, however, as Deadpool has been hired to kill Peter Parker.

Things only get more complicated from there, as several foes from both beyond the grave and the very living realm serve to give these two a hard time, testing the mettle their (often contrasting) morals are made of.

The title was rebranded as Spider-Man vs. Deadpool following the launch of Marvel Legacy.