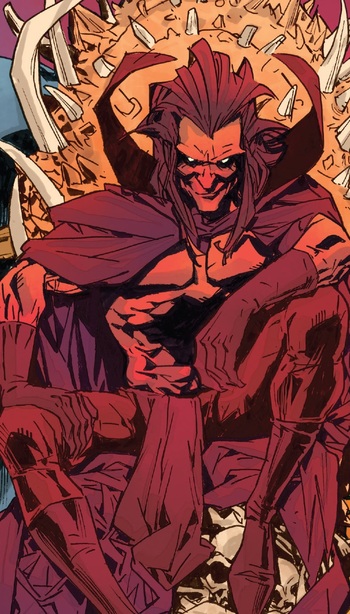 "Please allow me to introduce myself, I'm a man of wealth and taste... No? Not even a smile? A chortle? Ooh, tough crowd."

Mephisto is a Marvel Universe character created by writer Stan Lee and artist John Buscema. He first appeared in The Silver Surfer #3 (Dec. 1968). Based on Mephistopheles – a demon character from the Faust legend, who often went by Mephisto as a nickname.

An embodiment of ultimate evil, powerful Hell Lord and Marvel's most common stand in for Satan. He has antagonized just about every hero (from Ghost Rider to Doctor Strange), but tends to single out those who are especially noble like the Silver Surfer and Thor. As can be expected, many of the traditional tropes associated with Satan are part of him.

His origins are unclear; Mephisto claims to have been created, along with many other demons, by the supreme being whose suicide resulted in the creation of the Marvel universe as well as the Infinity Gems. He also claimed that his total evil nature is because the supreme being did not choose to make him good as that being had no concept of it.

Mephisto is responsible for a number of evil acts, including capturing and holding the soul of Cynthia Von Doom – the mother of Doctor Doom — until Doctor Strange and Doom free her to ascend to heaven. He was jealous of the worship of the fire demon Zarathos, so, posing as Satan, Mephisto creates the Ghost Rider by bonding Zarathos to Johnny Blaze — though this has been subjected to numerous revisions and retcons. In one story where he battled Thor, he was shown to have various historical villains in his realm, such as Adolf Hitler, Blackbeard, and Attila the Hun. He has also created his 'son' Blackheart, a demonic entity that plagues many of Earth's heroes. And naturally, it's almost impossible to forget his actions in One More Day.