S.H.I.E.L.D. in general
S.H.I.E.L.D. is the organization led by Nick Fury that deals with threats to national security, specially those involving meta-humans of any kind. 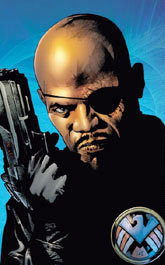 The one-eyed director of S.H.I.E.L.D. tasked with forming the super soldier organization called the Ultimates. Tends to be paranoid, manipulative, and has lots of secrets. Notably, Bryan Hitch and Mark Millar asked Samuel L. Jackson for permission to use his likeness for this version of the character, which has led to Jackson playing Fury in the Marvel Cinematic Universe.
Betty Ross 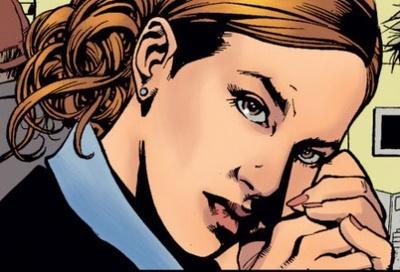 Daughter of General Ross and the on again off again love interest of Bruce Banner. Betty faces the grueling task of marketing the supersoldier project as a superhero team and it only gets harder when the threats they were formed to address fail to emerge right away. Seemingly cold and manipulative, which is not a good match for Bruce. In Ultimate Wolverine vs Hulk, she becomes the Ultimate Marvel version of She-Hulk. 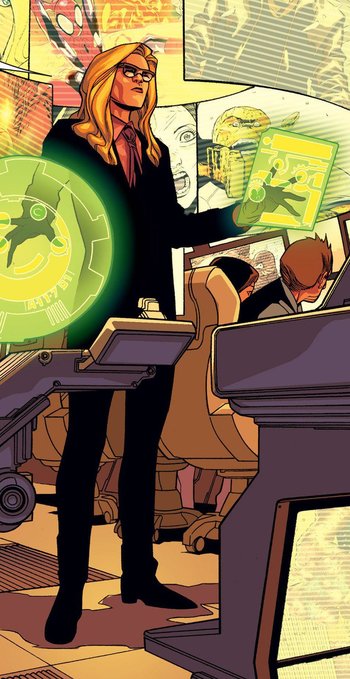 Nick Fury may not be in charge, but S.H.I.E.L.D. has to keep up working.

Initially the head of security for Cape Canaveral, Carol Danvers was the one who questioned Marh-Vehl after his defection. Some time later, when Nick Fury was ousted from SHIELD, she was made Director in his place. She didn't do terrifically well, and was eventually removed and replaced with a restored Nick Fury after the death of Spider-Man. 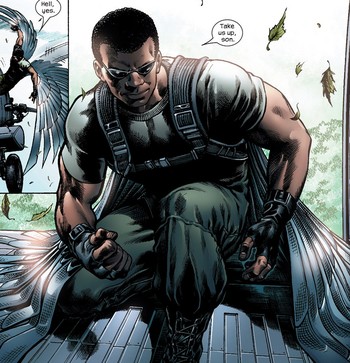 The head of security for Project PEGASUS, a (supposedly) secret SHIELD facility. Has probably the worst luck and the greatest job security in the world. 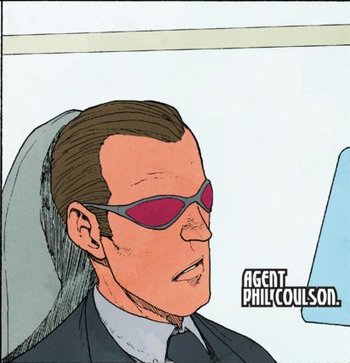 Incursions all over? Don't worry, this is not his first rodeo.
A S.H.I.E.L.D. agent, first seen during the Cataclysm. S.H.I.E.L.D. was disbanded after it, but he kept working as the leader of the Future Foundation.

The Ultimates in General

Tropes applying to the Ultimates as a whole: 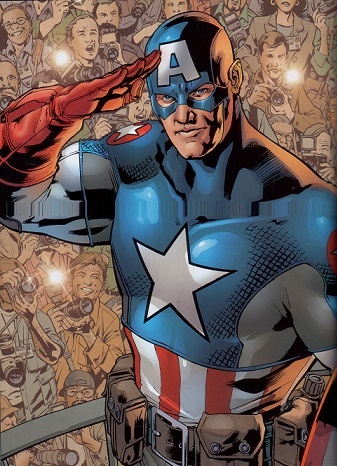 Issue one of volume one opens with Steve Roger's final World War two mission. He is discovered in a glacier just in time to make him a part of the premier line up. Augmented by a unique supersoldier formula that has so far only worked on him, Captain America has peak human physical abilities and fighting skill. Being wrapped in the flag makes him a natural choice for leading the team even if he's 60 years behind the times. A lot of his personal arc in the first two volumes has to do with him adjusting to the realities of 60 years suddenly passing, from culture shock to finding his friends old or dead. 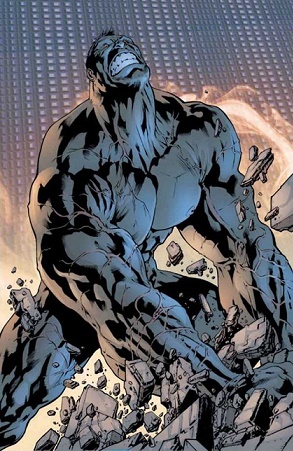 Bruce's life's work has been trying to replicate the success of Captain America, the first botched result of which, led to his transformation into the Hulk. In this universe, the Hulk is more of an unleashed id than the angry child of his classic counterpart, using his tremendous physical strength to address all of Banner's insecurities in the most direct ways possible. Having stabilized himself, he chooses to Hulk out in the first half of volume one giving the team something to fight. They choose to cover up the connection between Banner and the Hulk turning their biggest mistake into their biggest media success. 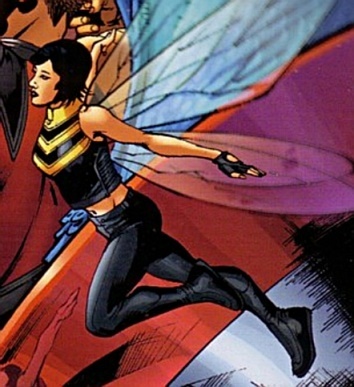 A biologist and one of her husband's first successes in engineering superheroes. Or so it seems. In truth, this universe's Wasp actually gets her powers from being a mutant. Her husband Hank is able to reverse engineer what she does to create his own powers. The Wasp is able to self miniaturize, fly with gossamer wings, and fire bioelectric bolts from her hands. While not much of a heavy hitter, her stealth and precision allowed her to take down the Hulk (by flying in his ear and zapping his brain.) 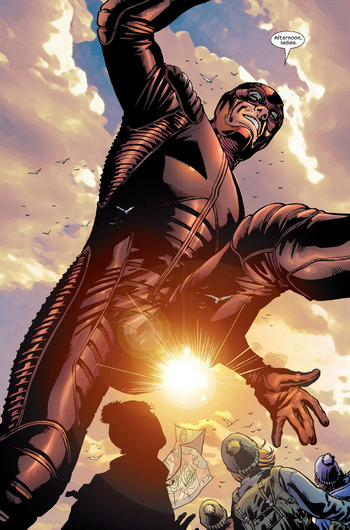 A scientist working for the Super-Soldier program, who replaced Bruce Banner. He reverse enginnered his mutant wife's shrinking powers, allowing him to turn into a "giant". It was the first success of the program, but it did not herald a bright career. He was quickly and unceremoniously taken down by Hulk in the Ultimates' first fight, he commited domestic abuse against his wife and tried to kill her, Captain America broke his bones for it, his formula was taken by S.H.I.E.L.D. and used to create an entire platoon of Giant Men (even bigger than him), Nick Fury doesn't want any of his inventions (not even for free), he joined a "super group" of mere fanboys with no super powers, he joined an international conspiracy against the US, he was incarcerated, the Wasp was killed during the Ultimatum wave and he was killed before he could try to revive her. 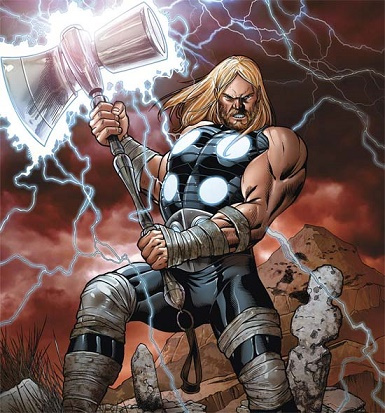 Not actually an official part of the team. Thor came to Earth in the modern era to warn the world about the conspiracies of the military industrial complex. That said, he is not so distrustful of the military that he would miss the noble qualities some of the Ultimates possess so he works with them when needed. One of the questions of the first two volumes is whether Thor is the actual Norse God of Thunder or a delusional super soldier. This gets resolved in the second volume. 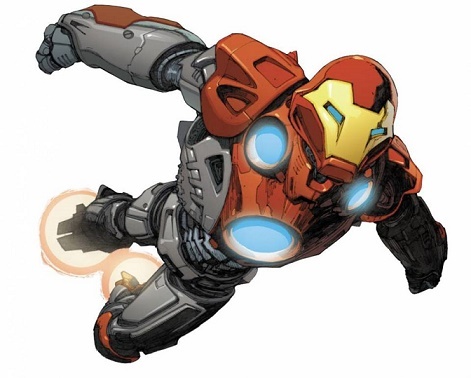 Tony Stark is a brilliant and enormously wealthy weapons manufacturer who gets brain cancer and decides to spend whatever time he has left saving the world. He's known for being eccentric, a playboy and almost perpetually drunk. Like Giant Man, his "powers" are replicated eventually giving the team multiple armored soldiers. 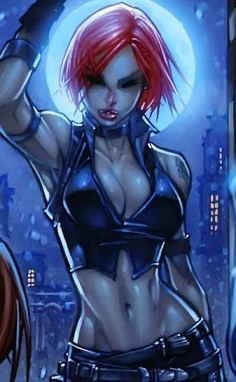 Natasha Romanoff is a former KGB spy/supersoldier turned US Black Ops. Along with Hawkeye, she is brought onto the public team with a fake background. Eventually becomes engaged to Tony Stark. Eventually revealed to be a traitor in Volume 2 using Stark and her Ultimates membership to undermine the team and steal Tony's fortune, though this doesn't work. 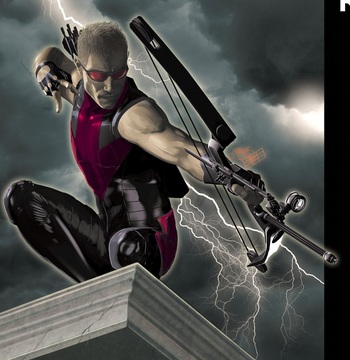 Black Ops soldier turned superhero. Deadly accurate with any ranged projectile. In Volumes One and Two, he mostly uses his bow and thrown weapons. In Volume Three after losing his family he switches to guns and changes his outfit. He goes back to the original one in "Ultimate Comics: Hawkeye". 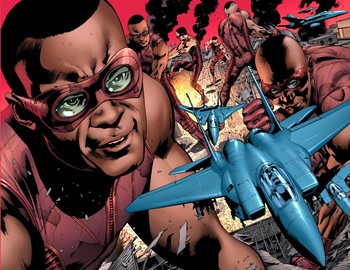 Henry Pym created a formula that allows him to grow up to giant size. He was removed from the team after his brutal attack to the Wasp, but the formula would not be wasted: S.H.I.E.L.D. reused it to create a whole platoon of Giant-Men.

The Mutants in General 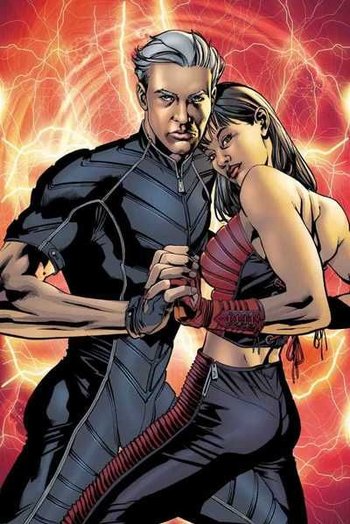 Following the events in Ultimate X-Men, Pietro and Wanda Maximoff, the children of prominent mutant terrorist Magneto, agreed to join the Ultimates acting as team members and informants. They tend to be aloof with marked aristocratic and European sensibilities. They also spent enough time together that it was obvious what was going on between them before it was stated explicitly in Volume Three. 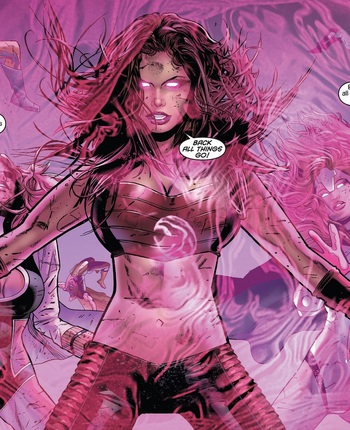 The Avengers in General 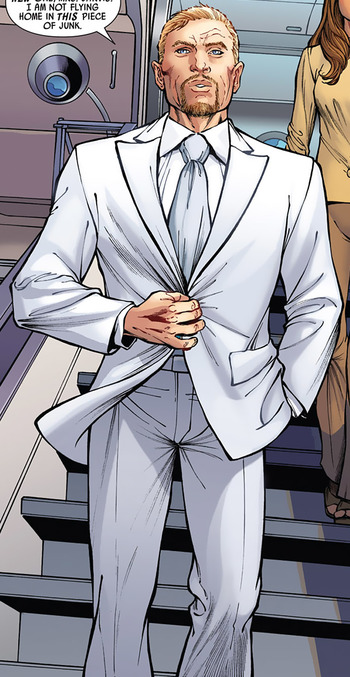 Mister? Doctor Stark, if you don't mind.
Tony's older brother, who is much more arrogant and morally dodgy. He gets on well with Nick Fury because of this.
War Machine 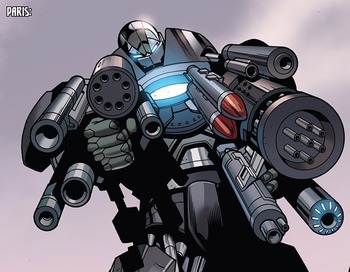 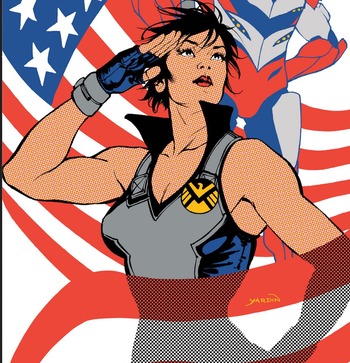 "I pledge allegiance to the Flag of the United States of America, and to the Republic for which it stands, one Nation under God, indivisible, with liberty and justice for all."
Nick Fury's ex-wife. She really hates him, and with good reason, since he slept with every female person she knew (friends, cousins, her mother) etc. She also has a child named Julius, who may or may not be Nick's.
Red Wasp

A member of the Liberators, who was recovered by S.H.I.E.L.D. and made to work for them. She joins the team for a chance at revenge on the Red Skull.
Nerd Hulk 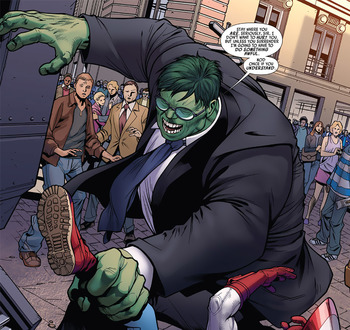 What? A combination of Banner's brain and Hulk's body? You took away his edge, you idiots!
A clone of the Hulk with Bruce Banner's intellect. Unfortunately his lack of rage-backed strength make him useless to Fury, who just wanted a Hulk that could smash whatever it was told to smash.
Tyrone Cash 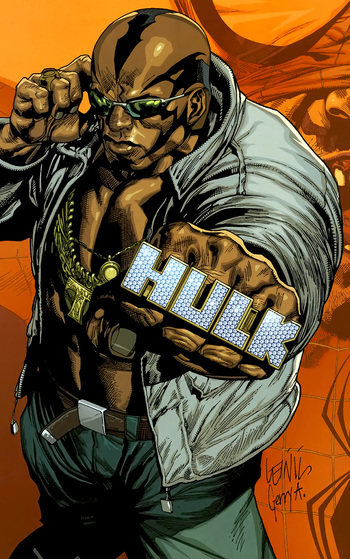 I warned them to put a good pic of me! I told him I'd kick their arse!
An old colleague and professor of Bruce Banner, who created an experimental formula to turn into a Hulk, and when it worked formed his own criminal empire.
The Punisher 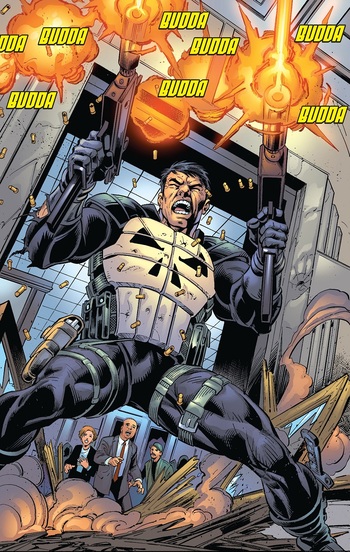 And this is what will happens if Punisher finds you jaywalking. 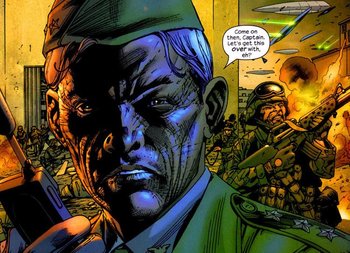 One of the Chitauri, an alien race of reptilian humanoids who supported the Nazis during World War II and who were the main threat that Captain America fought against.
Loki 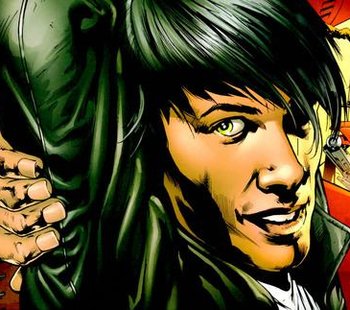 They had a Norse god on their side. It's only fair you should get one too.

The Cain to Thor's Abel, Loki is revealed to be The Man Behind the Man for the first two volumes of the series, pulling everyone's strings to get his brother out of the picture and conquer the world for shits and giggles. More malicious than mischievous, he is nonetheless the God of Mischief and, when provoked, is more than willing to prove the "God" part of his name. 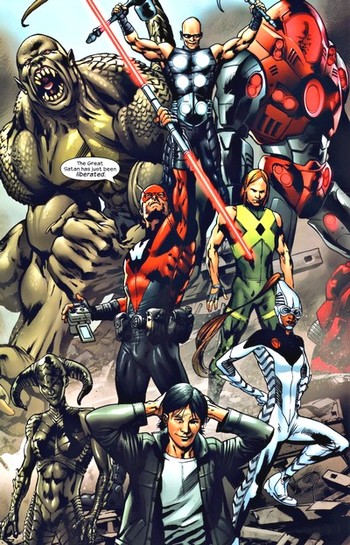 The Great Satan has just been liberated.

A Super Soldier team put together by nations worried about the escalation of the American super-soldier initiative. They invade the United States in volume 2. The team is run by Loki. 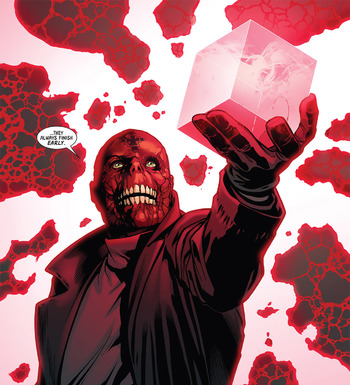 "And for my first trick, I will turn half the Ultimates into dust. Oh, wait..."
The Maker
Modi Thorson

Modi is the son of Thor and Hela, one of the few Asgardians to survive the Maker's assault on Asgard, and the God of Anger. After being left in the Room Without Doors, he aligns with Hydra to take revenge on his father.
Ultron

One of the robots created by Henry Pym after being kicked out of the Ultimates. It got self-awareness and tried to replace the Ultimates with robot doubles.
Hela 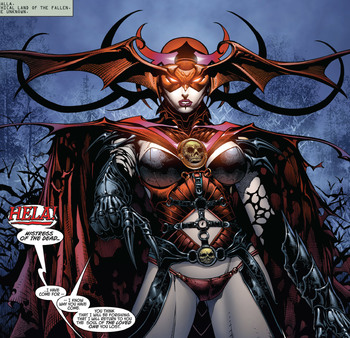 The ruler of Hel, the afterlife of the Asgardians

The European answer to the Ultimates, consisting of one super-soldier for each of the union's nations, forwarded by Doctor James Braddock. They also serve with the Ultimates on occasion. 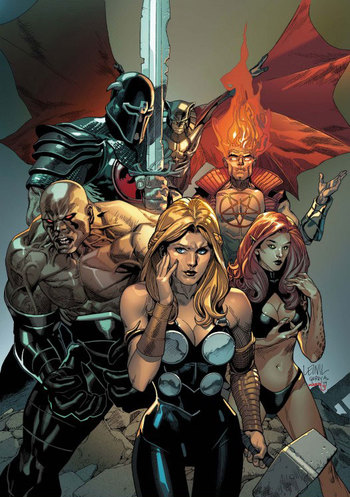 Not so much of a joke now...
A group of super-hero wannabes Hank Pym runs into after getting kicked out of the Ultimates. Their number includes Nighthawk, Black Knight, Power Man, Son of Satan, Hellcat and Valkyrie.
The Ghost Rider 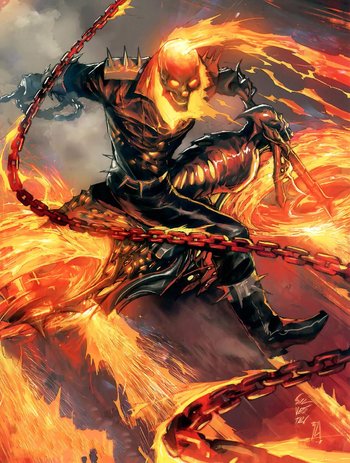 Once, there was a man named Johnny Blaze, who along with his girlfriend was attacked by a satanic biker gang, who sacrificed Johnny to the Devil in exchange for their souls. But the Devil, in that way of his, thought it was fun to make a deal with Johnny, sparing his girlfriend in exchange for serving as his agent, the Ghost Rider.
Ka-Zar and Shanna

Ka-Zar and Shanna the She-Devil 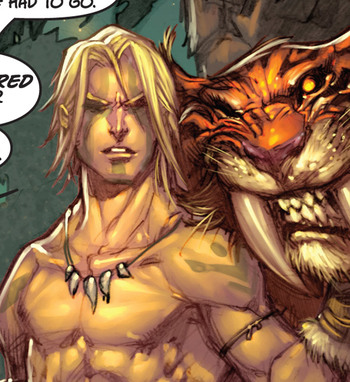 Natives of the Savage Land, the Ultimates met them when they went there to fight Magneto after the Scarlet Witch's murder.