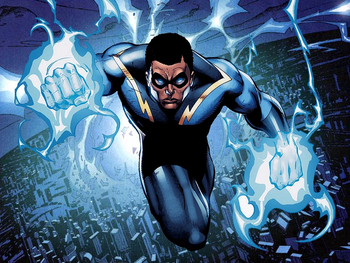 The First, and doubtless still The Best.
"Look, I am solidly aware that an electromagnetic African-American Super is a total cliché. My apologies. I didn't order this power off the menu, I swear."
— Volt, Irredeemable

Examples on this page don't necessarily need to be superheroes though. A Sub-Trope of Fountain of Expies.

Static Shock's opening sums up the protagonist's powers quite nicely.

Static Shock's opening sums up the protagonist's powers quite nicely.