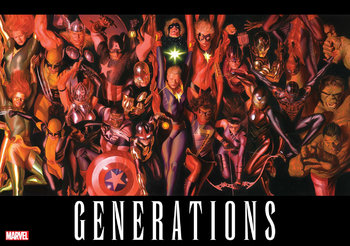 Generations is a 2017 anthology comic series published by Marvel Comics, written and drawn by a variety of creators behind some of the company's most popular characters of the modern era.

In the direct aftermath of the Secret Empire event, ten heroes - Hawkeye (Kate Bishop), Spider-Man (Miles Morales), the Hulk (Amadeus Cho), Ms. Marvel (Kamala Khan), Captain Marvel (Carol Danvers), Wolverine (X-23), Thor (Jane Foster), the time-displaced Jean Grey, Ironheart (Riri Williams), and Captain America (Sam Wilson) are brought to a mysterious place known as Vanishing Point, a realm where Kobik had hid in after she was disassembled by Fixer. Here, these heroes are given a great opportunity - to stand shoulder to shoulder with those who came before them without the burdens of the past, present, or future.

Generations is comprised of the following one-shots, published throughout August and September 2017:

Generations
The majority of the above comics are written by the writers of one (or both) of each pairing's current ongoing titlenote with the exception of Cullen Bunn on The Phoenix, who's currently writing the younger Jean Grey in X-Men: Blue but aren't considered part of those series.

See Marvel Legacy, a 2017 relaunch of the mainstream Marvel Universe directly following this event, which takes inspiration from its main theme of "legacy"l