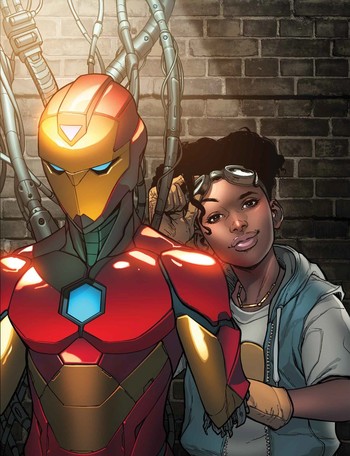 "Those who move with courage make the path for those who live in fear."

Born shortly after the death of her father, Riri Williams grew up in Chicago with her mother and stepfather, soon discovering a pretty surprising truth about herself: she was a genius intellect with special aptitude for engineering. By the age of fifteen, Riri was already attending M.I.T. on a free scholarship offered to her because of it.

It was during this time that Riri reverse-engineered the Iron Man Mark 41 suit in her dorm room, using (stolen) materials from the M.I.T. campus. After testing out her suit's capabilities a few times, Riri had her first taste of crimefighting by stopping a truck carrying a group of prison escapees in New Mexico, which came at the cost of her suit's armor integrity.

While rebuilding her suit from the ground up, Tony Stark learned of her accomplishment, fully endorsing her potential as a hero by offering to take her under his wing.

Later as part of Marvel: A Fresh Start, Riri returned in a new ongoing solo, written by Eve Ewing and illustrated by Kevin Libranda. It lasted for twelve issues. She also joined the teenage superhero team the Champions.

A live action Disney+ series based on the character was announced for the Marvel Cinematic Universe in December 2020, with Dominique Thorne (If Beale Street Could Talk) cast in the title role.