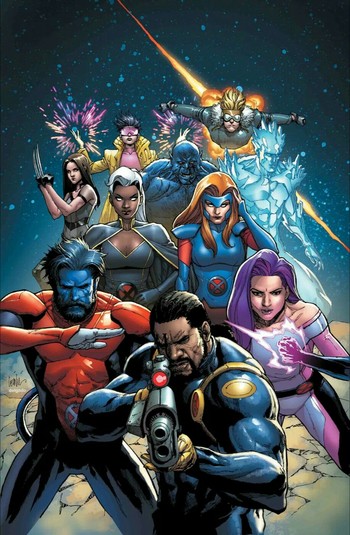 The fifth volume of Uncanny X-Men, launched in 2018 as part of the Fresh Start initiative. Initially written by Ed Brisson, Matthew Rosenberg and Kelly Thompson with the "X-Men Disassembled" storyline, Rosenberg later took over as sole writer starting with issue #11.

"X-Men Disassembled" serves as a relaunch for most of the X-Men line, with the cancellation of X-Men: Gold, X-Men: Blue and X-Men: Red. Said arc leads into the Age of X-Man Bat Family crossover. The series also features the official returns of both Cyclops and Wolverine to the X-Men after lengthy absences; together the two will form a new X-Men team.

The series concluded with issue #22 to make way for Jonathan Hickman's return to Marvel with his X-Men run.

The fifth volume provides examples of the following tropes: