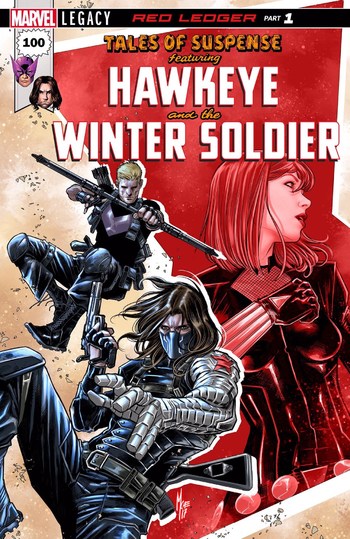 Tales of Suspense: Red Ledger is a 2017 — 2018 storyline published by Marvel Comics, written by Matthew Rosenberg and drawn by Travel Foreman. It's a revival of the classic anthology comic of the same name, released as part of the Marvel Legacy initiative.

After the events of Secret Empire, Natasha Romanoff —better known as Black Widow— is dead. When an unknown figure starts picking off her old enemies one by one, former lover Clint Barton —Hawkeye— tasks himself with investigating this series of murders and avenging Natasha's untimely demise.

But he can't do it all himself, however, and the one person who can help him is Bucky Barnes —the Winter Soldier himself— who also shares a romantic past with the late Widow.

Compare to Marvel Two-in-One: Fate of the Four, another 2017 relaunch of a classic Marvel anthology comic, featuring the Human Torch and the Thing.