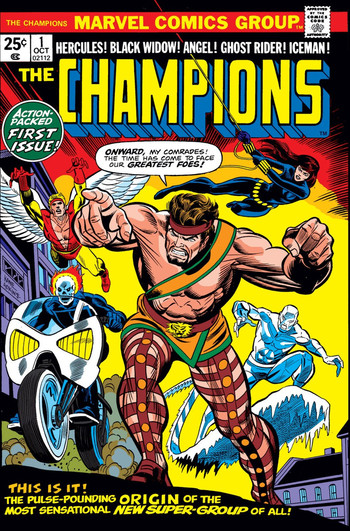 Holy crap, it's Hercules, Iceman, Black Widow, Ghost Rider, and Angel! But why? It makes no sense!
— Kate Bishop

The Champions of Los Angeles — generally shortened down to simply "the Champions" up until another team came along with that name — was a West Coast Team of superheroes consisting of Hercules, Iceman, Angel, Black Widow, Ghost Rider, and a new character named Darkstar. Black Goliath (Bill Foster) also served as the team's scientific advisor. The team was created by Tony Isabella and Don Heck.

The history of why the team exists is interesting: at the time it came out, Giant-Size X-Men #1 had come out and the X-Men had become popular again, but, of the original five X-Men, Chris Claremont only wanted to use Cyclops and Jean Grey. Beast had already become a member of The Avengers, leaving the last two of the original X-Men, Iceman and Angel, in comic book limbo. So Tony Isabella came up with an idea to do a road-trip book with Angel and Iceman, but editor Len Wein insisted that the team have at least five members, including a woman, a strong man, and someone with their own book. Hence: Black Widow, Hercules, and Ghost Rider.

The book itself begins with Angel and Iceman attending UCLA as students. They quickly get roped into fighting the Greek god Pluto alongside Black Widow, Hercules, and Ghost Rider. After defeating Pluto, they decided to become a team operating out of Los Angeles, while Angel bankrolled with the group. During issue #10, a new member joined: Darkstar or Laynia Petrovna, a Russian superhero who was part of a team that was supposed to bring Black Widow back to Russia. Instead, she switched sides and joined the Champions, where Iceman developed a crush on her. At the end of the series, she told him she didn't feel the same way and then left for Russia again.

Tony Isabella wrote the first two issues, co-wrote the third with Bill Mantlo, and then passed off the writing duties to Chris Claremont for the fourth issue. Isabella returned with issue #5, with Bill Mantlo taking over with issue #8 and becoming the de facto writer for the rest of the book. The book itself ended with issue #17 and the team officially disbanded in Peter Parker, The Spectacular Spider-Man #18 (also written by Mantlo).

Despite the book ending in 1978, the team has occasionally gotten back together again. There was, surprisingly, an X-Force / Champions Annual in 1998 where the team reunited and teamed up with X-Force to battle Pluto again. The entire team has never really reunited since, although most of the members came back together Iceman vol 3 #6 to mourn the passing of Black Widow (don't worry, she got better) in a storyline called "Champions Reunited."

In 2016, a new team of teenage superheroes calling themselves the Champions would emerge and find a lot more success.

The 1975 Champions included the following tropes: