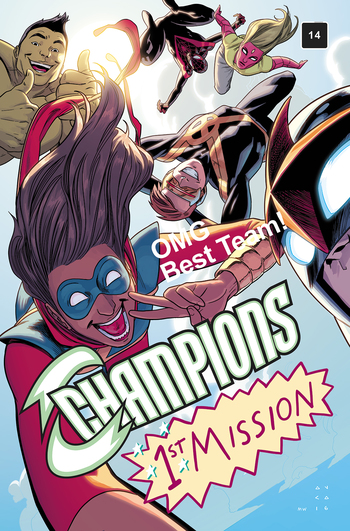 Champions is a 2016 Marvel comic book, published as part of the Marvel NOW! relaunch. It is written by Mark Waid with art by Humberto Ramos. This Comic Book Run introduced the Champions with some of the most popular younger heroes of the Marvel Universe working together to set right what they believed their elders have messed up, namely heroism.
Advertisement:

In the wake of Civil War II, Kamala Khan (Ms. Marvel) has become disillusioned by the heroes she used to idolize and regard as her mentors. Taking matters into her own hands, she officially quits The Avengers and rounds up former teammates Sam Alexander (Nova) and Miles Morales (Spider-Man) to fight crime on their own terms. Along the way, they're joined Amadeus Cho (the Totally Awesome Hulk), Viv Vision (daughter of The Vision), and teenage Cyclops (time-displaced from The '60s). Later additions to the team include Ironheart (Riri Williams), Nadia van Dyne (The Unstoppable Wasp), Snowguard (Amka Aliyak), Red Locust (Fernanda Ramirez), and Patriot (Rayshaun Lucas).

With a team chock full of teenagers, expect some rivalries, hormonal urges, and a healthy dash of generational angst to ensue.