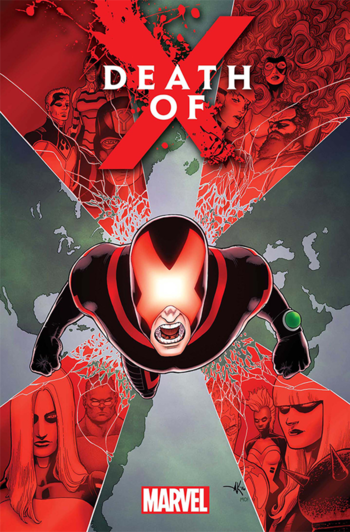 Death of X is a four-part limited series published by Marvel Comics, written by Charles Soule and Jeff Lemire with art by Aaron Kuder, as part of the Marvel NOW! initiative in 2016.

Set in the eight month gap between Secret Wars and Extraordinary X-Men, Death of X depicts the start of tensions between mutants and The Inhumans (regarding the lethal effects of Terrigen Mist to the former), as well as finally explaining what happened to Cyclops —and why he's disappeared— in the interim.

Needless to say, things won't end up well for anybody involved.

See also: Inhumans vs. X-Men, which (indirectly) follows this story.

Death of X provides examples of: