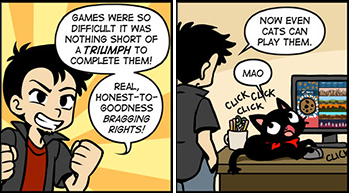 * Immediately after complaining about the game's difficulty and showcasing some cheat codes to make the game beatable.
Advertisement:

Sometimes a gamer plays a new game only to find the level of challenge is less than what they expected — sometimes considerably so. To some gamers, this shall not stand! Video Games are about overcoming challenge! No Challenge Equals No Satisfaction, after all, and without challenge, a game is little more than a pointless exercise.

Of course, there is nothing inherently wrong with an "easy" game. Some people prefer them that way. Further, depending on the individual, the genre and the game playing setting, the reasons for gaming vary greatly from "overcoming challenge for a sense of accomplishment" to "distracting one from the mundane minutia of life" and everything in between. Some changes that make a game easier can remove unnecessarily difficult or frustrating parts, making for a more enjoyable experience overall. This trope is the reaction fans have when a game, particularly one from a franchise known for challenging games, presents itself as less challenging than its predecessors or than what one would normally expect from games of a similar genre.

This can certainly be a valid reaction, however; when you can breeze through a game without breaking a sweat once, even the parts that should be difficult, it is easy for a game to become a monotonous and boring experience. Excessive handholding, the oversimplification or elimination of more complex mechanics, and easily accessible "win buttons" or Game Breakers with no downside to using them can also sink a game, among other related issues. When an attempt to make a game more accessible instead removes depth or any sense of challenge from parts that were clearly intended to be difficult, this reaction is understandable.

This is not a page to complain about easy games. Only add examples where the sentiment has been expressed by reviewers or a sizable number of fans when comparing a game to previous installments in a franchise or similar games of that genre.

Be aware with adding examples where people mention about how once they found a Game-Breaker, learned to exploit a Good Bad Bug, caught the hang of it, learned the way the game mechanics worked, then that they found the game trivial afterwards.

This type of complaint can happen if the game's predecessor was more difficult. The level of reasonableness depends on what is being complained about; if it's new Anti-Frustration Features, better design decisions, or the smoothing out or elimination of clunkiness that has historically been a thing and has been viewed as part of the challenge, it's probably just people being change-averse. On the other hand, if it's people complaining about the game being boring or monotonous due to gameplay or design decisions that make it easy to rip the game wide open, streamline it to the point where there is zero depth (or incentive to experiment), or handhold the player to the point where failure is virtually impossible, they may have a point.

This also becomes incredibly annoying for developers if people complained about the previous game being too hard, or if it was hard but for all the wrong reasons. It really makes for the perpetual Unpleasable Fanbase.

It's Short, So It Sucks! is a Sister Trope, with several points overlapping with this. The opposite is It's Hard, So It Sucks!. Also see They Changed It, Now It Sucks!. True Art Is Incomprehensible is mildly related, in the sense that something can't be considered quality art if most people can easily understand it. When people try to force the way they play the game (which generally has to do with difficulty) onto other people, you have a Scrub or a "Stop Having Fun" Guy. When you have both It's Easy, so It Sucks and It's Hard, So It Sucks!, you wind up with an Unpleasable Fanbase.