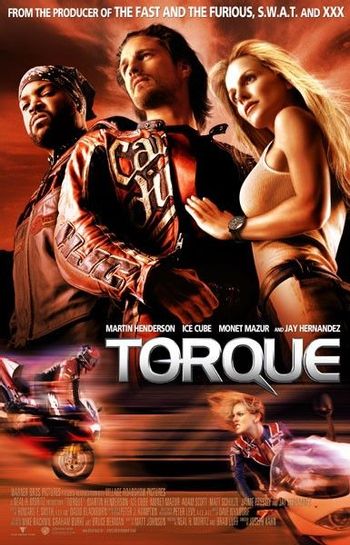 The Fast and the Furious... WITH MOTORCYCLES!

Torque is a 2004 action film directed by Joseph Kahn.

Martin Henderson plays Badass Biker Cary Ford. 6 months prior to the events of the film, Henry James (Matt Schulze), the leader of a biker gang called the Hellions requested he look after some bikes. When trying to move them, however, Ford found crystal meth in the fuel tanks. Ford hid the bikes and fled to Thailand, where has has been for six months, leading the police to believe he is a drug dealer and Henry to believe he stole his bikes. Now Ford's returned to the states to reconcile with his girlfriend Shane (Monet Mazur). Henry's still pissed, so he frames Ford for the murder of the younger brother of Trey (Ice Cube), the leader of a rival biker gang called the Reapers. Motorcycle chases ensue...