Video Game / You Have to Burn the Rope 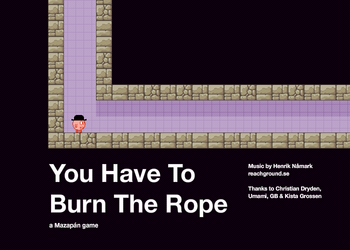 You Have to Burn the Rope is a parody of Puzzle Bosses, Platform Games, and possibly video games in general, created by "Mazapan." It may also be considered to be the Mirror Universe version of I Wanna Be the Guy.

Saying anything more would ruin the experience, so just play it here

. It's free, though due to the discontinuation of Adobe Flash, an external plugin is needed to play it. And if you want to listen to/download the end credits song, here's the link

, but don't do so until AFTER you finish the game or it'll spoil the experience.

Has no relation to the similar-sounding games Cut the Rope and Burn The Rope, other than the fact that ropes are involved.

You Have To Add The Trope:

By the way, if you'd just clicked the link at the beginning instead of reading all this, you'd have finished the game a few times over by now.
Feedback

You Have to Burn the Rope ("Now You're a Hero")

You Have to Burn the Rope ("Now You're a Hero")