Video Game / The You Testament 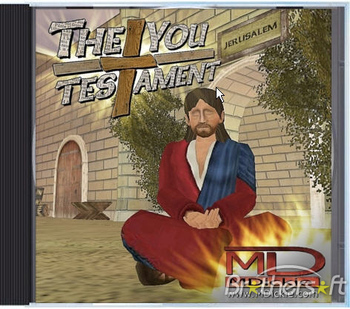 All the crosses are marked I.N.R.I. It's Latin for ''did not do the research'.
—PC Gamer
Advertisement:

The You Testament is a 2008 speculative history video game by indie developer Mat Dickie, better known by his username MDickie. The player takes the role of a disciple of Jesus Christ, who follows his teacher through a loose retelling of the life of Jesus as detailed in the New Testament.

Although The You Testament was meant to be MDickie's last game, he eventually changed his mind and made a Mission-Pack Sequel called Making of a Prophet, where the player follows Muhammad as he founds the religion of Islam. In 2018, in celebration of the original game's 10th anniversary, the game was remade in 2D for mobile devices, under the title The You Testament: The 2D Coming.

Compare with Dickie's other game Hard Time made with similar technology, but about life in prison.

"IDOLATRY MOTHERFUCKER, DO YOU KNOW OF IT?"