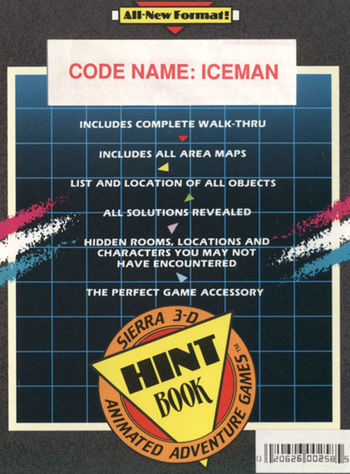 "Well, I've traveled for too much time
to see you spend one more dime
on stupid strategy guides
when the answer wasn't inside
Just figure it out you dummy
Then you won't have to spend nine ninety-nine."
— Star Salzman, Mega Man X - Dreams Come True

Strategy Guides are different than Walkthroughs in that they provide a portable, professional, and easily accessible hard copy while playing. However, they are more likely to avoid giving outright spoilers and munchkin-like hints, preferring to suggest ideas rather than spoiling the playing aspect. Aside from average gaming information, they also usually contain:

Because they are generally released alongside the game and can not be updated, they almost never contain any gameplay tips, tricks, or glitches that are discovered by players post-release. However, over the years, many strategy guide publishers have provided free updates and corrections on their websites.

Unfortunately for a small number of video games, when some strategy guides are made to go with games, they aren't released outside of Japan, meaning that for some games, you have to use other means to get through difficult sections of games, unless you buy the Japanese strategy guides and can understand the Japanese language.

A few of the more notable strategy guide publishers were Prima Games, BradyGames and Nintendo Power, none of which are around anymore, as BradyGames merged with Prima Games in 2015 and ever since then, all strategy guides had been made and published by Prima until it announced it'll stop making guides in early 2019. As for Nintendo Power, their guides ceased production in 2007 and no guides from then have since been released. Considering that Nintendo Power itself ended in 2012, it's unlikely that we'll see any more from them.

In the end, strategy guides fell into disuse with the advent of the Internet. Online forums, text guides and walkthroughs from websites such as GameFAQs, video guides covering all kinds of content from secrets to strategies, and community wikis combining the knowledge of hundreds of players, left the idea of actually needing a physical strategy guide redundant.

Due to the idea of competition with free walkthroughs, official strategy guides became a much more prominent product than it was in the past, usually containing nice art or extras to justify their price, which is usually around $15-$20 USD, although in certain cases, some can end up at more than $40. Many companies will sell it along with the associated game at a lowered price.

Some appropriately complicated games will have thicker guides on newsprint paper with only black ink to offset costs.

It is quite unfortunate to note that some games, intentionally or unintentionally, require a guide to complete. See Hint System for the in-game version.