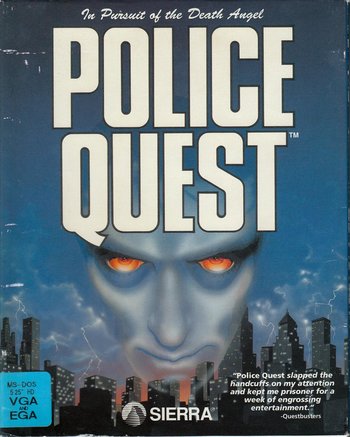 Police Quest is a series of adventure games developed and published by Sierra. Similar to an interactive Police Procedural, the first three games had players take the role of Sonny Bonds, a police officer in the city of Lytton, California.

Reporting for his shift at the beginning of the first game, Bonds soon becomes aware of a drug ring operating in Lytton — masterminded by one man, Jessie Bains. Known as the Death Angel, Bains is aggressively moving in on the territory of Lytton's local dealers, and things are getting messy. Enlisting the help of a local Hooker with a Heart of Gold named Marie, Bonds is assigned to an elaborate sting operation that ends with Bains behind bars and Sonny and Marie returning to day-in, day-out normality.

This doesn't last, however, because in the second game, Bains escapes from prison, capturing (and later killing) a prison guard in the process and making it deadly clear that he will kill anyone that helped put him in. As the bodies start to pile up, Bonds, promoted to homicide detective, discovers Bains has targeted Marie (now a retired Hooker with a Heart of Gold, and Sonny's girlfriend). Proceeding into the latter stages of the game, Bonds tracks Bains to his hideout, saves Marie, and (eventually) proposes to her.

Several years later, Sonny and Marie are happily married, but there's more trouble to come from the Bains family. The Death Angel's brother has sworn revenge, and it's up to Sonny, now a Detective Sergeant, to protect his beloved Lytton, which has grown into a city. This one pulls out all the stops, with situations ranging from dirty cops to sexual assault. (Strangely enough, the revenge plot ends up being an afterthought.)

Police Quest 1-3 were produced by Jim Walls, a retired California state trooper, and the situations Bonds encountered were true-to-reality, following police procedures to the letter. If you stepped out of line during a bust, the judge would toss your case out of court. If you went crazy with your gun, or didn't properly care for your vehicle, that was it — game over.

Starting with Police Quest: Open Season (non-officially known as PQIV), the series came under the helm of LAPD Chief Darryl F. Gates (Walls having moved on by that point). Open Season was the last to focus on a specific, named detective — this time, LAPD Homicide Detective John Carey. Working from Parker Center, the player now has to cope with much more violent, graphic crimes. The player is introduced to Carey on the first screen, with a dead cop in an alley by a dumpster — a dumpster which, when opened so the Criminal Investigative Division can photograph it, reveals the body of a six-year-old boy.

The later games in the Police Quest series were Police Quest In Name Only — and only for the first two installments, after which it is most often known as the S.W.A.T. series. This series frees itself from the limits of a set character by placing the player directly in the role of a 'SWAT Pup' — a trainee, on his first real assignment. Like the first games, the SWAT series adhered strictly to police procedure. The player is trained in the basics of SWAT teamwork ('basics', because SWAT teams don't generally make their full tactical procedures known to the public), and is expected to obey the rules. Even attempting to fast-forward through the first game's opening cutscene (where the Element Leader gives his welcome speech) has the Element Leader take you to task for interrupting him, and warns you very firmly that you should not do it again. Ever.

Sonny Bonds does return to the Police Quest series, though, in Police Quest: SWAT 2, as a selectable team member, and in SWAT 3: Close Quarters Combat, where he is now SWAT leader, which seems a natural progression for him by then. In SWAT 4 Sonny has a cameo as a veteran member of SWAT and trainer of new SWAT recruits. The SWAT sub-series is peculiar in that the first entry was primarily a Full Motion Video, the second an overhead Real-Time Strategy game, and the latter two tactical FPSs, notorious since any downed civilian, suspect or bystander, costs points from your total score. SWAT teams really are the babysitters of the populace.

You can play the first game free and legally in HTML5, here.

Currently, you can purchase the Police Quest collection, containing I (including the VGA remake), II, III, and IV

(there is a bundle you can purchase for $5 off) on GOG.com. For the record, both collections contain all the manuals and supplemental material to help you figure out your way in the game.

Jim Walls later moved on to Tsunami Games where he produced the Spiritual Successor, Blue Force. Decades later he started a Kickstarter for the Police Quest-like game, Precinct,

however, it was cancelled due to lack of funding. He did say in recent interviews that he still wants to get the game produced in some way in the future.

Police Quest (and its VGA remake) contains examples of: