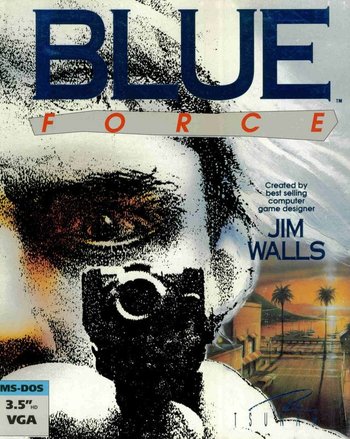 Blue Force is a 1993 DOS game. The game is as a spiritual successor to the Police Quest series of adventure games by former series creator, Jim Walls, who had moved on to working for Tsunami Games following the release of Police Quest III: The Kindred.

The game follows a rookie police officer, Jake Ryan, whose parents were slain ten years prior in an unsolved murder. However, when new evidence begins turning up, Jake Ryan teams up with his father's former partner in order to solve this crime once and for all and put his parents' murderers behind bars.

The game runs on the TsACE engine. Jake's movements are controlled with icons selectable from a badge menu, while the inventory is accessed by cycling through items at the bottom, with four of them displayed at a time. Graphics use digitised photos of real-life people and locations are displayed in VGA. A soundtrack by Ken Allen plays throughout the game.