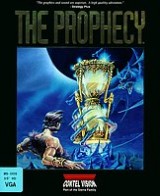 Ween: The Prophecy AKA The Prophecy is a first-person perspective point and click adventure game released by Coktel Vision in 1992, shortly before it became a subsidiary of Sierra.
Advertisement:

This game takes a fantasy setting, in which you play a young wizard tasked to fulfill the prophecy and eradicate a power-hungry wizard Kraal, who has just returned from exile. To fulfill the prophecy you must go on 3 quests, solving various puzzles along the way to be rewarded with 3 grains of sand, that must be placed in a hourglass to kill Kraal. Then Kraal starts interfering and you have to overcome the obstacles he creates, and race to fulfill the prophecy in time.

Like in other Coktel's adventures (including Gobliiins series and Lost In Time), the interface is simplified, and the game has a heavier focus on self-sufficient puzzles than other traditional adventures. Objects around the levels are always detected by the cursor, making each screen and the challenges within quick to comprehend. Generally you have to solve each puzzle in sequence. The game experiments with the toning of the graphics, using a faux-sepia style outside and some bright colours inside, which changes the atmosphere somewhat.