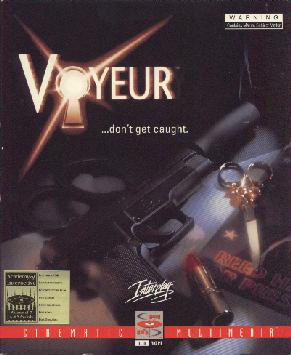 Voyeur and Voyeur II were Full Motion Video games released in 1993 and 1996 respectively. The first game was originally released as the "flagship" product for the short-lived Philips CD-i multimedia system/video game console. DOS and Macintosh computer ports were later released and the sequel was only available for those computers.

In the first game, you are a private investigator hired by a member of the wealthy Hawke family in order to gain enough evidence to bring down the corrupt Reed Hawke, a wealthy CEO who has gathered his family together for the weekend to prepare for his announcement that he will be running for President of the United States. You control various hidden cameras located through the Hawke family home in an effort to gather enough evidence to destroy Reed Hawke's career.

Depending on the evidence that the player gathers, he or she can go to the police or feed information directly to a Hawke family member, and he or she also has to move through and collect evidence in real-time. Thus, leaving one scene to investigate another and coming back can mean missing a lot of information. Hence, the game had Multiple Endings, six scenarios in all.

In 1996, Philips Media (same company, new name) released a sequel to Voyeur. This time hidden cameras were placed on an isolated mountain cabin where various people have gathered for the reading of a will that is expected to give Dr. Elizabeth Duran control of a lucrative research institute. All of the cabin guests want control of the institute and the player's goal is to watch the cameras in order to find out which one is a murderer before he or she kills Dr. Duran.

The format of the game was similar to that of the Digital Pictures full motion video games such as Night Trap and Double Switch, with two important differences. The first major difference was that Voyeur's full motion video included female nudity and simulated sex scenes giving the game a warning label on its box about its mature subject matter. This is in contrast to full motion video games such as Night Trap where everything was kept within the equivalence of a PG-13 rating. The second major difference was that the playable character's client was different every game and thus the storyline would change slightly. While Night Trap and Double Switch did have multiple endings, most of them if you failed, the storyline did not change.