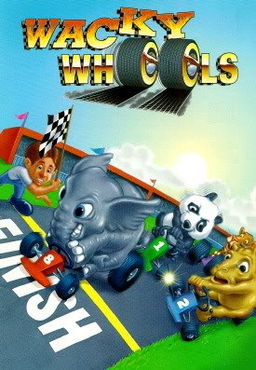 Wacky Wheels was released in 1994 by Apogee Software for MS-DOS and was one of the few 3D racing games of the time. Inspired by Super Mario Kart, developers Andy Edwardson and Shaun Gadalla wanted to create a similar experience for PC owners.

The Wacky part of the game is that the eight playable characters in the game have all escaped from a zoo, race on ride-on lawnmowers and throw hedgehogs at each other during the race. Seriously.

The game originally had a base release and a bonus pack containing a number of additional tracks and multiplayer arenas available separately, but Apogee soon made the bonus pack standard with all registered copies of the game.

A playable demo titled Wacky Kart was first sent out to developer Copysoft, but they weren't interested, leaving them to go to Apogee. However, the source code of the game was also included on the demo, leaving Copysoft to rush out a clone of the game prior to Wacky Wheels' release called Skunny Kart starring their squirrel mascot Skunny. Edwardson and Gadalla accused Copysoft of copyright infringement, but no lawsuits were filed.