Video Game / Wrath of the Gods 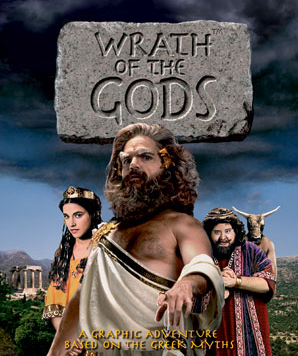 A surprisingly good Edutainment Adventure Game by Luminaria, with controls similar to the Space Quest series but with live-action graphics. It was released in 1994 for Windows PCs and macOS.
Advertisement:

The player character, generally referred to only as (the) "Hero," was a foundling, left to the mercy of the elements as a baby before being rescued and raised by the centaur Chiron. Upon reaching a decent age, the Hero was sent out to see the world, given only some gems and a strange ring that was left with him as a baby. He then wanders through the entirety of the Ancient Greek world, emulating (or preempting) the adventures of the famous Greek heroes.