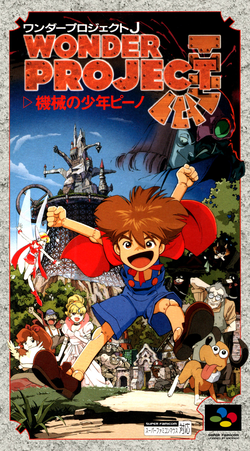 Wonder Project J: Mechanical Boy Pino (released in 1994 for the Super Famicom) is a point-and-click raising sim utilizing 2D art, a strong Osamu Tezuka-inspired aesthetic, plus a bit of Studio Ghibli thrown in for good measure. Neither this game nor its sequel were officially released outside of Japan, but both have been fan-translated into English.
Advertisement:

Stop us if you've heard this one: This is the story of an eccentric craftsman who built himself a boy. The boy's 'conscience' would follow him around and help out when needed, and together they would embark on a great adventure when the boy's creator-father is taken away. But then the boy starts kicking your dog, eating plates of food whole, and worshiping gardening tools. And suddenly you're completely overwhelmed, and nearly broke from repair costs, since the little deviant can't help but jump into the wishing well for no explicit purpose...

Developed by former Technos staff who were also responsible for E.V.O.: Search for Eden, Wonder Project J has you controlling a fairylike robot, Tinker, to look after another young robot (known as a Gijin) and teach him what it means to be human. In order to raise the mechanical boy to be more human-like, you need to improve his stats. Similarly to the Princess Maker games, different actions will raise some stats while lowering others; for example, kicking a football is great for leg power, but lowers intelligence. You have to be sure to tell Pino if he's doing the right thing or not by either praising or scolding him. If extreme action is necessary, Tinker is armed with a correctional device. Which happens to be hammer shaped. And to think this was never localized!

A sequel, Wonder Project J2, was released in 1996 for the Nintendo 64. Set 15 years after the original, this game has the player raising a girl robot named Josette this time around.