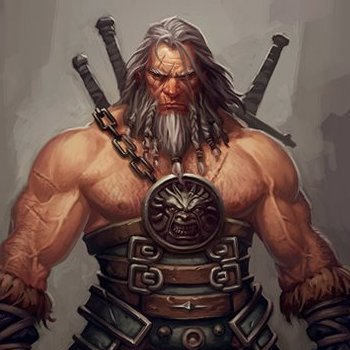 Barbarians usually do not have access to good shaving blades or mirrors. So it is not rare to see a barbarian with Manly Facial Hair that puts all other beards to shame. Not only do they dwarf the beards of civilized men, but they also have really awesome dreadlocks and Braids of Barbarism. He may even have body parts from his slain enemies stuck in there. Anyone with a beard like that is immediately flagged as a Berserker, a Blood Knight or both.

The more barbaric the man is, the more of these traits (largeness, dreadlockedness, braidedness, number of enemy parts) his beard has. As such, the Beard of Barbarism is used to contrast barbarians with civilized soldiers, who either are clean shaven or have tamed facial hair. These beards can also help determine seniority among the barbarians, as the older men have longer beards.

Usually paired with Wild Hair or Barbarian Longhair. Dwarf beards also fit this trope most of the time, though with less barbaric connotations as Dwarves are usually depicted as at least as civilized as the humans around them.

A Sub-Trope of Manly Facial Hair.

See also Horns of Barbarism, Pelts of the Barbarian and Wizard Beard.