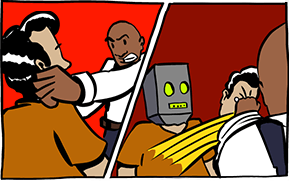 Then they get wounded, and instead of bleeding, they're releasing sparks. Or maybe you catch them doing something no human is capable of, like changing stations by blinking, or lifting a car.

Apparently, the human you've been with was one of them cyborgs, Ridiculously Human Robots, or Mechanical Lifeforms.

At this point, one of two things may happen.

If the character is an enemy, this is the signal for The Hero to go all out in battle. After all, it's Just a Machine, who cares if it gets hurt or killed?

However, if the character is a friend, this will lead to much shock and/or angst for everyone as they ask themselves What Measure Is a Non-Human? This may include a Heroic BSoD if even the robot doesn't know. But what about the real, human, friend? There are two options. One, that it never existed, and This Was His True Form all along (or that he was replaced a long time ago, way before the story began, and none of the heroes had actually meet the real guy). Or two, that he he was kidnapped and replaced as part of an Assimilation Plot or by a spy shapeshifter, and now the heroes must search and rescue their friend, if he was not killed.

A specific kind of Glamour Failure. For the alien and other organic creature version of this trope, see Machine Blood and Bizarre Alien Biology. Occasionally appears as a subversion of Mortal Wound Reveal — the robot should have died, but because of its non-biological nature, it won't die, causing much in the way of Oh, Crap! moments. If the robotic reveal is used as a cheap getaway resource, then it was probably Actually a Doombot.

Compare Unrobotic Reveal and Animated Armor. When only a limb or two are robotic/artificial, then it's Prosthetic Limb Reveal instead.

Spoilers ahoy, so be wary.

After Gromit and Shaun trap Preston in the Knit-O-Matic and give him 'a close shave', something begins to happen inside the machine, prompting Wendeline to reveal that Preston is actually a cyber-dog built by her father that ended up turning evil.

After Gromit and Shaun trap Preston in the Knit-O-Matic and give him 'a close shave', something begins to happen inside the machine, prompting Wendeline to reveal that Preston is actually a cyber-dog built by her father that ended up turning evil.