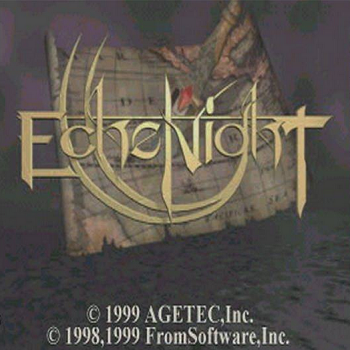 Echo Night is an obscure Survival Horror series that debuted on the PlayStation by FromSoftware. Each of the games uses the First Person Adventure format, putting the player directly in the shoes of the unfortunate Richard Osmond, solving puzzles and struggling to survive while helping ghosts.
Advertisement:

The original Echo Night was released in 1998 at home, and in 1999 globally. It opens with Richard being called to the torched remains of his late father's house. While sorting through the rubble, he stumbles across a hidden room with a mysterious painting... which abruptly transports him onto the deck of the Orpheus, a ship whose passengers and crew met a mysterious end decades ago. All appear to him as mere shadows, bound to the ship by past regrets; as he helps them resolve these issues, he gains strange crystals called Astral Pieces. Of course, not all of the ghosts are patiently waiting to be freed, to say nothing of the mystery surrounding what happened to the Orpheus in the first place...

The second game in the series, Echo Night 2: The Lord of Nightmares, followed in 1999, but it never saw its planned English release. Richard's girlfriend Rebecca Morgan has vanished; his search for answers leads him to a beautiful-but-haunted mansion, and to pictures of a woman who looks exactly like Rebecca despite having lived ages ago.

The third installment was released in 2004 as the series' only entry on the PS2, and it also jumps the series into the year 2044. Echo Night: Beyond sees Richard Osmond and his fiancee Claudia Selfer about to fulfill their dream of being married on the moon. But before landing, their shuttle takes severe damage, and Richard wakes up outside the station disoriented and alone.