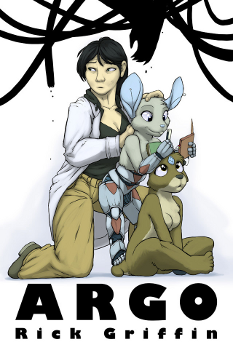 Argo is the first published short story by Rick Griffin, creator of award-winning webcomic Housepets!. Taking place in the distant future when androids outnumber humans, advancements in artificial intelligence is intentionally stifled by heavy government regulations. When Mira, an ambitious and disillusioned engineer, stumbles upon a shockingly advanced android, she begins to learn more than she ever could have imagined about artificial intelligence, and herself.

The story explores themes such as balancing fear and progress, the nature of intelligence, and what it means to be human.

Not to be confused with the 2012 Ben Affleck film.